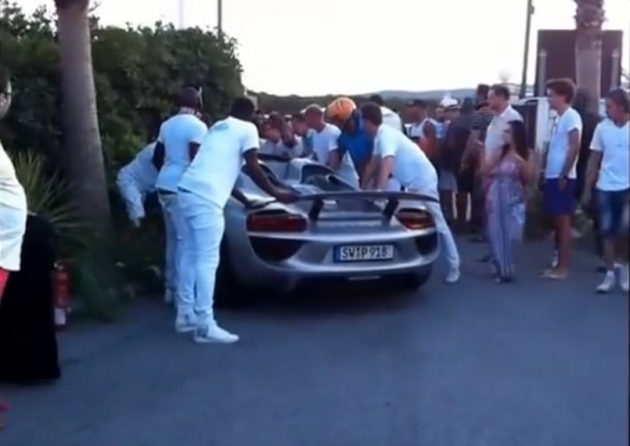 A man crashed his expensive Porsche 918 Spyder into a tree to avoid running a person over
Photo: Kristina Champin via YouTube

It’s understandable that after spending more than $800,000 on a sports car you want to show it off, but a crowded parking lot usually isn’t the best place to test performance engines.

Check out the video of the guy who crashed his Porsche into a tree:

The video was filmed at a parking lot in Saint-Tropez, France. The man can be seen gesturing to the camera before accelerating so quickly that he nearly hit a person and had to swerve into a tree instead. There were no major injuries, but the impact was strong enough for the airbags to deploy. Somebody handed the driver a beverage afterwards and he laughed about crashing his vehicle, but his passenger didn’t look nearly as amused.

The pictures of the crash below can be enlarged by clicking them:

The 2015 Porsche 918 Spyder comes equipped with a 4.6-liter V8 engine, which is complimented by front and rear electric motors. The combination of engines result in a machine that can propel itself from 0 to 60 mph in just 2.6 seconds, due to its 887 horsepower and 949 lb-ft of torque. The reported top-speed of this Porsche is an astonishing 214 mph.

Thankfully nobody was hurt in this accident and we ended up getting a new video to stream during our lunch breaks.