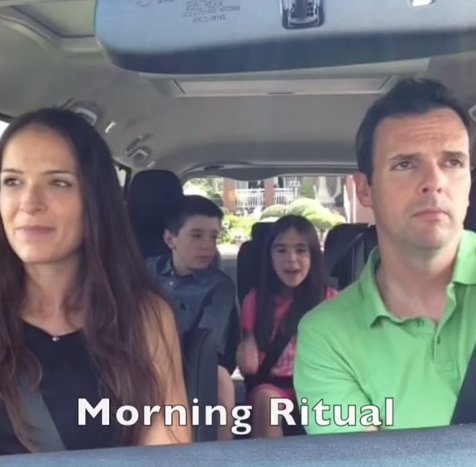 The Eh Bee Family in their Swagger Wagon

Recently, Toyota unveiled their new 2015 Sienna minivan, which has received a minor design refresh for the new model year. As part of the campaign to go along with this (kind of) new vehicle, Toyota is trying to bring some street cred to the minivan—something that doesn’t come easily, given the segment’s boring and blah reputation. But if Toyota has its way, the new Sienna will become known by one nickname and one nickname only: Swagger Wagon.

The Swagger Wagon campaign features the 2015 Toyota Sienna as the star of multiple videos created by real families and entitled “Eh Bee Family,” “Action Movie Kid,” and “Convos With My 2-Year-Old.” Each video features the families enjoying life in their Sienna. “Eh Bee” features a family of four in a compilation of six-second Vine videos that depict them taking road trips, experiencing confusion as to whether “Sienna” is a vehicle or a woman (yes, really), and finally their fun morning ritual in their minivan.

“Action Movie Kid” is the hero in a video titled “Sienna Submarine.” The toddler and his dad are in their 2015 Sienna—which doubles as a submarine—under the sea. The vehicle is surrounded by sharks, but it’s no big deal to Action Movie Kid. His dad turns on the Sienna’s headlights, which makes the sharks retreat. It turns out that the two are sitting in their van on the driveway with tarp covering the windows, playing make-believe.

The series “Convos With My 2-Year-Old” features multiple videos, such as this one featuring the family camping with their minivan. Dad is loading up the car for a family camping trip while talking to his Sienna, which, obviously, is talking back via the new Sienna’s Driver Easy Speak feature and asking if it can sleep in the tent, given that the Sienna is the one doing all the heavy lifting on this trip.