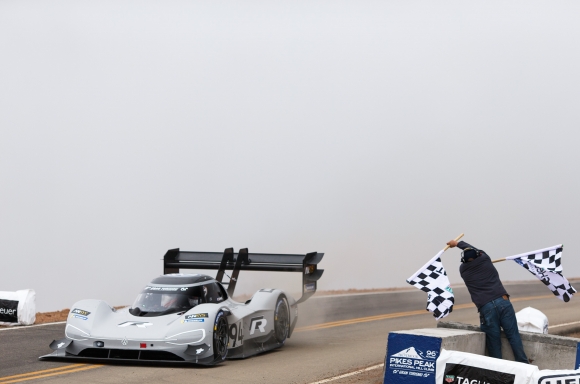 The highly-anticipated race has come and gone, and Volkswagen made sure it was one to remember.  At the Pikes Peak International Hill Climb on Sunday, Romain Dumas drove the all-electric I.D. R Pikes Peak right into the record books. With his 7:57 time, not only did he break the previous record for electric vehicles, but he also beat the all-time record from Sebastian Loeb in 2013 by 16 seconds and became the first driver to break the 8 minute barrier in the 96 years this racing event has been held.

Volkswagen’s racing car was created just for Pikes Peak, and it was developed and built in just 250 days. The engineers found the perfect balance between minimum weight and maximum power to achieve this winning performance, mostly by compensating for the loss of downforce that resulted from the thin air on Pikes Peak. The I.D. R Pikes Peak’s huge rear wing and aerodynamic chassis worked with the fully-electric drive technology powered by glycerol, a non-toxic sugar alcohol that combusts without harmful exhaust flames.

With only one shot at the hill climb, Dumas made the most of it. “The I.D. R Pikes Peak is the most impressive car I have ever driven in competition,” he said after the race. “The electric drivetrain means that many things are different and I learned a lot during the project. The team did an indescribably meticulous, yet at the same time relaxed, job. Not only did we get the desired result, but the team spirit was also spot on. I am incredibly proud to have been a part of it.”

With the I.D. R Pikes Peak’s 500kW E-engines, things are looking good for Volkswagen’s future electric lineup. The basis of these future electric vehicles will use the same parts as the powertrain on the racing car, and with this record-breaking performance, we’ll be sure to keep our eyes open for what’s next with Volkswagen’s EVs.