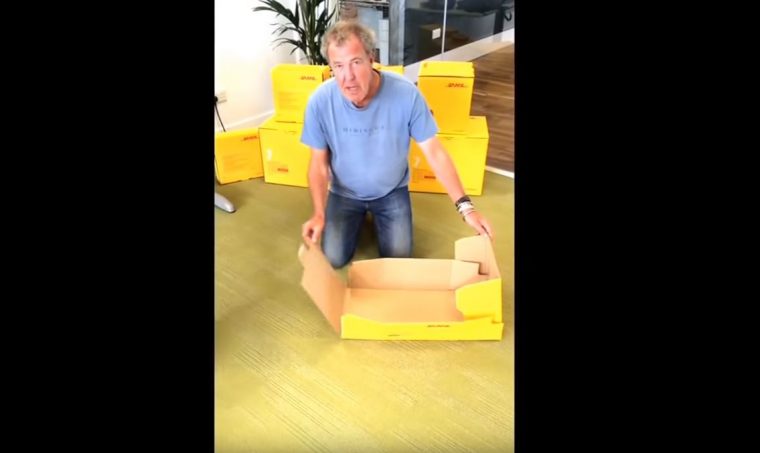 Despite the vertical filming angle, this video might be more entertaining than the newly revamped Top Gear

Have you been feeling lost since the revamp of Top Gear? Not sure how to go on without a bit of Jeremy Clarkson, Richard Hammond, and James May in your life?

Well, never fear—I’ve got you covered.

A new video has surfaced on James May’s personal YouTube page that is sure to get you your fix of the former Top Gear trio, and it shows Jeremy Clarkson assembling a DHL cardboard box.

Yup, you read that right. It is literally a video of the car enthusiast and beloved TV show host assembling a box.

Now, there is a reason behind this new video. The trio each took the “DHL box challenge” to mark the shipping company’s sponsorship of their new show, which is called The Grand Tour. Despite the fact that it’s filmed vertically—what else would you expect from Captain Slow?—the video has still managed to get well over 1.6 million views at the time of this post.

Not to mention the fact that it is significantly more entertaining than the new Top Gear. And no, I’m not joking.

Need A New Car? See why the 2016 Mitsubishi Outlander was named the Most Affordable Three-Row Vehicle

The new Top Gear was reportedly watched by an average of 4.4 million viewers for its first episode, receiving a 23% share of TV viewing for its time slot. This number dropped significantly during the second broadcast, giving the British car show only 14% share of all television viewing in its time slot.

It was actually beaten out by BBC One’s Antique Roadshow. I mean, yes, Antique Roadshow can really get the adrenaline pumping at times—after all, how much is that statue of a bird nesting in a hand?!—but it should never be able to beat out Top Gear when it comes to viewing share.

Chris Evans, the show’s newest host, is defending the show’s poor performance, though, saying that viewing figures will be higher once on-demand services are considered.

The way Top Gear is being viewed is repositioning the way television is consumed. Last week 9 millions viewers. This week we shall see.

Overnight television viewing figures for Top Gear have never been less relevant. Obviously some newspapers prefer to live in the past.

Despite Evan’s protests, there’s no doubt that the new version of this beloved car show is floundering a bit. And it’s no doubt it’s due to the former trio of hosts’ loyal following.

Have A Stinky Car? Remember to follow these tips to remove smells from your car

So, if you’re one of the viewers that are disappointed with the new Top Gear, never fear. Just watch the video of Jeremy Clarkson building a DHL box below and enjoy the quips of the original Top Gear trio—including Clarkson leaving the screen a bit to go get his hammer in an effort to build his cardboard box. After all, we all need something to tide us over until The Grand Tour debuts.