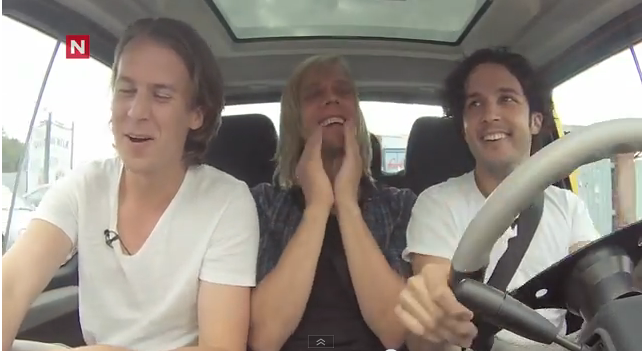 Norwegian comedians, Ylvis, giggle around town as they scare the wits out of unsuspecting pedestrians.

If you’ve been anywhere near the internet in the last month, then you’re probably familiar with Norwegian brothers/comedy duo Ylvis, who asked the burning question that far too many scholars have been afraid to approach: what does the fox say?  And although we may already think we know what the electric car says (which is not much at all), that hasn’t stopped Bård and Vegard Ylvisåker from trying to pull their best “Rowdy” Roddy Piper on us (“Just when you think you have all the answers, I change the questions”) with their latest viral video: a prank featuring a Buddy electric car and the air horn from a locomotive.

Notoriously silent, EVs have been the subject of a minimum sound rule proposal from the National Highway Traffic Safety Administration in order to keep drivers and pedestrians safe.  It’s that same quietness that allowed the brothers to sneak up on unsuspecting pedestrians and wait for the right time to strike.

Just in time for Halloween, Ylvis are able to stalk bicyclists and shoppers with Michael Myers-like silence, drawing close enough to almost touch their victims before blasting them with a good dose of noise.  Surprisingly, the prankees all seem to take their fright in stride…well, except for the first guy, who gives Norway’s famed comedy duo the double bird salute.  What does the angry Norwegian say?  Well, we can’t really repeat that here, though we’re pretty sure it’s not “Jacha-chacha-chacha-chow!”

Well, at least it’s better than “Gangnam Style,” am I right? What did you think of the Ylvis EV prank video?