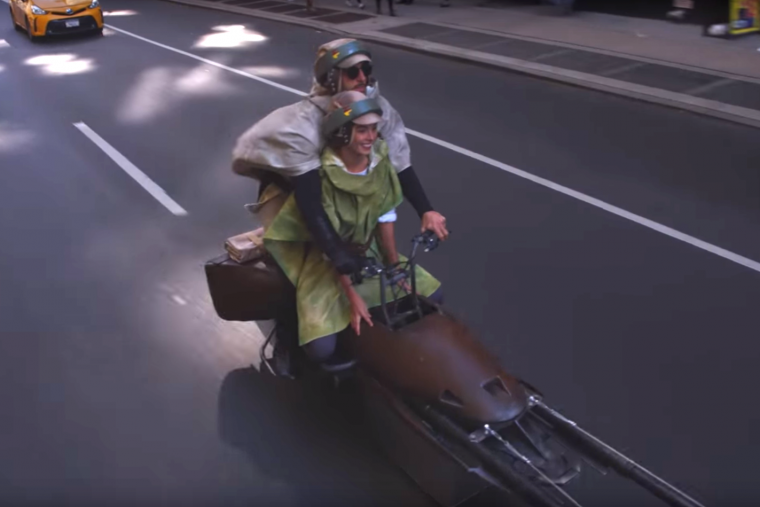 YouTubers Jesse Wellens and Casey Neistat always take Halloween to the next level and this year, they did not disappoint.

The two creators have a tradition of designing crazy costumes for Halloween and making their way around a city, filming reactions of the costumes for a video. One year, they even snowboarded through the streets of New York City. For 2017, they decided to channel their inner Jedis and recreated the Star Wars Speeders used in the film and drove them around NYC.

Star Wars Speeders are floating transportation devices that, well, speed by everything else. They’re known for their long noses and ability to fly by, quite literally. To recreate the Speeders for Halloween, Wellens and Neistat re-purposed their Super 73 electric motorbikes.

A team at Lithium Cycles used a variety of low-cost, low-durability parts to add onto the motorbikes to create the Speeders. The construction primarily included PVC pipes and other plastic parts, expanding foam, cardboard, and fiberglass for the body. Of course, the entire costume would be pointless if the Speeders weren’t floating – then they wouldn’t be Speeders. They installed Plexiglas mirrors on the sides of the wheels; this way, the mirrors reflect the road and create the illusion that the bike is floating.

The YouTubers kept up appearances by dressing in costumes themselves, including Stormtroopers and other characters from the film series. Sounds effects of lasers shooting from the Speeders added to the aesthetic.

In the end of their video, a cop pulled them over and began to pat everyone down. However, if you know Jesse and Casey at all, or if you watched the behind the scenes video, you’ll know that the whole police encounter is fake. In fact, they often set up these “arrest” scenarios for their main channel videos to raise the stakes. However, while the arrest scenario this year was set up, the person patting them down was a real NYPD officer.

The materials that make up the Speeders are clearly not meant to last in the long-term, but for a Halloween costume, they impressed many passersby. Jesse and Casey always seem to outdo themselves, so we’re excited to see what they come up with next year.