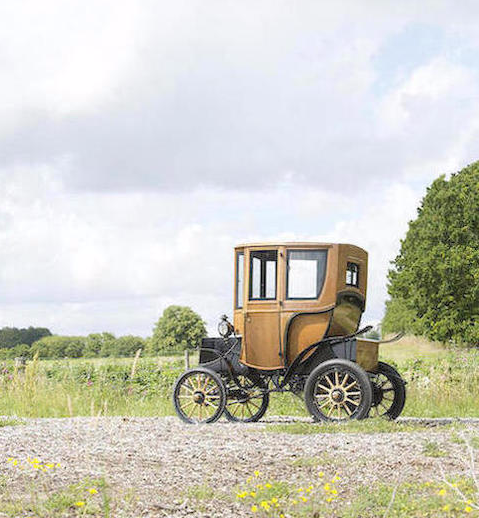 Ebeltoft, Denmark was the host of the recent Fredericksen auction. Among the other items was one particularly rare item: a 1905 Woods Queen Victoria Brougham electric car, the only one known to survive in the world.

At the turn of the 20th century, gasoline technology was not terribly well-developed. It was slow, smelled bad, and dangerous—starting a gas car at the time could break your arm. On top of that, gasoline was not widely sold—to get it, you had to visit a chemist’s shop—and it was likely to break down on the way home.

By contrast, electric and steam cars were far more reliable, despite the battery technology of the time relying on more primitive lead acid. The electric cars, like today, were clean and silent, and back then didn’t require great strength to start (or try to take your arm off).

This vehicle was built by Woods Motor Vehicle Company, a Chicago-based company which built about 500 electric cars annually until it went out of business in 1918.

When it was built, the Woods Queen Victoria Brougham was considered a luxury model at $3,000 ($71,000 in today’s money). This particular car is upholstered entirely in leather and includes such features as discrete controls, a glass flower vase, and a removable cab for feeling the wind in your hair. The drive system has been upgraded with modern batteries, so it is still drivable up to its maximum speed of about 30 mph.