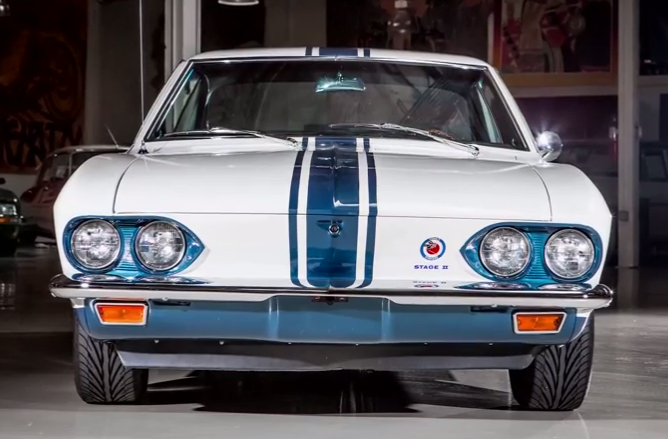 On this week’s entry of Jay Leno’s Garage, the former Tonight Show host introduces us to his 1966 Chevy Corvair Yenko Stinger. For those of you to whom the name Yenko is not terribly familiar, it is given to the Stinger by its creator, Don Yenko.

Yenko was a race car driver who participated in races such as 24 Hours of Le Mans, 24 Hours of Daytona, and 12 Hours of Sebring; Yenko was arguably best known for his performance shop, from which customers could order high performance parts or have modifications made in-house for their Chevrolet vehicles after it opened in 1957.

In 1965, the first of Yenko’s aftermarket cars, the aforementioned Stinger, was released with a number of potential upgrades that increased horsepower among other things. Yenko is perhaps best known as the father of the Central Office Production Order Camaro, otherwise known as the Yenko Camaro or COPO Camaro, which is still being manufactured in limited quantities to this day. Yenko, who was dubbed by many “the Carroll Shelby of Chevrolet,” died in a plane crash in 1987.

Leno’s 1966 Chevy Corvair Yenko Stinger is No. 54 of about 70 still left today (YenkoStinger.org keeps a well-maintained ledger of those vehicles’ current owners and locations), and he purchased the superlatively-restored Stage II Stinger from fireman, Jeff Guzzetta, who is responsible for much of its restoration.

For those not in the know: a Stage I Stinger was outfitted with the standard Corvair engine with a bolstered 140 horsepower output; a Stage II Stinger got 190 horsepower; the Stage III Stinger, deemed a “racing only” model, got 220 horses; and the Stage IV Stinger, of which Leno notes “Oh my god, that’s way too fast,” is rated at 240 horses.

Leno calls his Stage II Stinger a “poor man’s Porsche 911,” but he by no measure means it as an insult: “…you have a flat-six like a Porsche, you’ve got four carburetors, this is probably the most European car General Motors has ever built…I consider it one of the ten best General Motors cars of all time.”

Coming from a guy who knows as much about cars as Leno, that’s word spun as good as gold. Take a look at the video below and see how this beast drives!