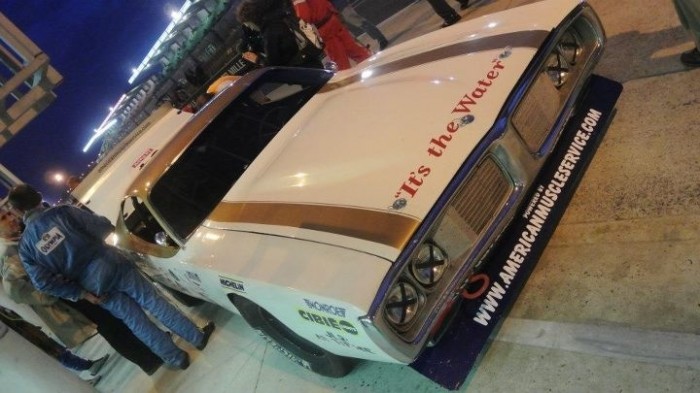 It’s entirely possible that everybody has that aunt or uncle or distant relative who’s got a primo-looking vintage muscle car in a shed somewhere.  Whenever you ask them about it, they’ll tell you no, they never take it out, because after all, what’s the point in spending all of that time restoring something intended to be fast and mean only to then let it be what it naturally must be?  Christopher Schwartz is not a man who is afraid to take his baby out for a spin.  By “his baby,” we mean a beautiful 1974 Olympia Charger.  By “out for a spin,” we mean 185 miles an hour along the straightaways  of the Circuit de la Sarthe during the Le Mans Classic vintage racing competition.

Over at Road & Track, you can read more about Schwartz and his team, who roll the NASCAR GT-spec Olympia Charger out for endurance races typically reserved for vintage Ferraris and Porsches.  Schwartz was originally inspired more than a decade ago upon finding a picture of a 1972 Dodge Charger belonging to Doug and Herschel McGriff at the 1976 Le Mans race.

“This car was pretty much unknown since it only did three laps,” he told Road & Track in their spotlight piece.  “I found some of the original crew from Olympia, Washington and met with them in 2005.  From there, we started with the idea of bringing the car back to Le Mans.”

Schwartz bought up a 1974 Charger that had won the 1977 USAC Championship and fitted it with all the necessary trimmings: a four-speed manual, Ford 9” rear, and Hurst/Airheart disc brakes.  The coup de grace?  A silver and gold Olympia aesthetic that would make the McGriffs (and Yukon Cornelius) proud. 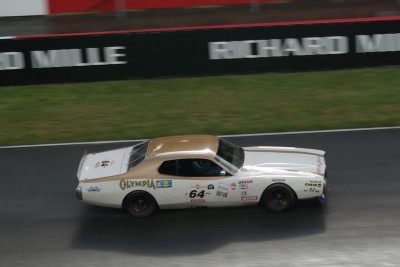 For the 2014 Le Mans Classic race, the Olympia Charger will boast an authentic NASCAR dry-sump Nichels HEMI, which was previously used by Grand National driver Ray Elder.  Schwartz and his team will be gearing to guide the vintage piece of Detroit muscle a strong finish.  To get the latest photos of the Olympia Charger as the Le Mans Classic nears, visit www.Olympia-Charger.com.