The 1984 PPG Pace Car is the Fifth Corvette Recovered So Far at the National Corvette Museum in Bowling Green. 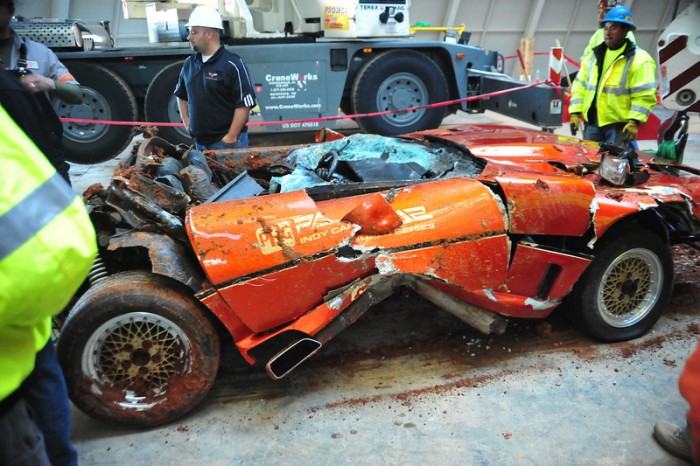 The 1984 PPG Pace Car is the latest Corvette recovered from the NCM sinkhole.

The saga of the sinkhole Corvettes continues today with more good news: after having successfully rescued the 1962 Tuxedo Black convertible Corvette, the 1993 40th Anniversary Corvette, the millionth Corvette ever produced, and the 2009 ZR1 “Blue Devil,” crews pulled the 1984 PPG Pace Car from the ground late on Wednesday. As such, the National Corvette Museum has graced us with video of the recovery process, seen below.

Sadly, the 1984 PPG Pace car seems to be the worst for wear among the five historic cars that have been pulled so far. While it seems like the previous four recovered will certainly need a significant amount of work to get back to showroom-quality appearances, the PPG Pace Car looks particularly rough. There is a catastrophic amount of damage to the passenger side of the frame in particular, and the rear quarters of the car are completely exposed with nothing remaining from the original body.

General Motors has vowed to lend their talents in restoring the eight Corvettes that fell into a sinkhole on February 12, and GM Global Design VP Ed Welburn and his crew will most assuredly have their work cut out for them with the 1984 PPG Pace Car.

With five down and three Corvettes yet to be pulled, check back in with us for more updates as the recovery process continues. Scroll down for more video, courtesy of the National Corvette Museum, of the recovery of the other four Corvettes that have been so far salvaged.