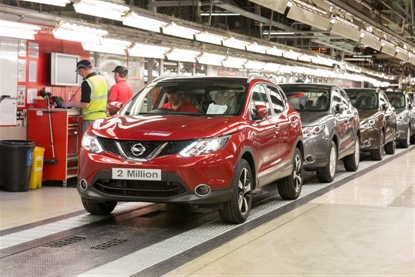 The 2 millionth Qashqai rolls off the line

Nissan has announced that the Qashqai crossover has crossed the two million unit mark in less than eight years, which makes it the fastest vehicle to reach that particular milestone in UK history.

“The Qashqai is helping Nissan to go from strength to strength in Europe,” said Paul Willcox, Chairman, Nissan Europe. “Two million customers can’t be wrong. This is further evidence of their trust in our brand. Thank you to all of our loyal customers and I congratulate all my colleagues in Sunderland for reaching this latest milestone.

“The Qashqai is one of 12 new models we have launched in the past 12 months in Europe, which has given Nissan the strongest and most cohesive line-up in our history.”

The 2 millionth Qashqai produced rolled off the line on November 3 in Magnetic Red. The milestone model is of the n-tec grade, which includes exclusive styling and Nissan Safety Shield technologies.

Nissan has invested £534 million (about $849 million USD) into the Sunderland, UK plant where the Qashqai is built, resulting in more than 11,000 new manufacturing jobs. Of the 2 million Qashqais built over the course of nearly eight years, around 1.7 million of them have been exported to the other 132 international markets where the crossover is sold.

The Qashqai is now the second-most-produced model at Nissan Sunderland behind the Micra, of which 2,368,704 were built from a period between 1992-2010.

Between first-gen production in China and Japan and the 2 millionth Qashqai rolling off the line at Sunderland, Nissan has built more than 2.5 million examples of the crossover since December 2006.