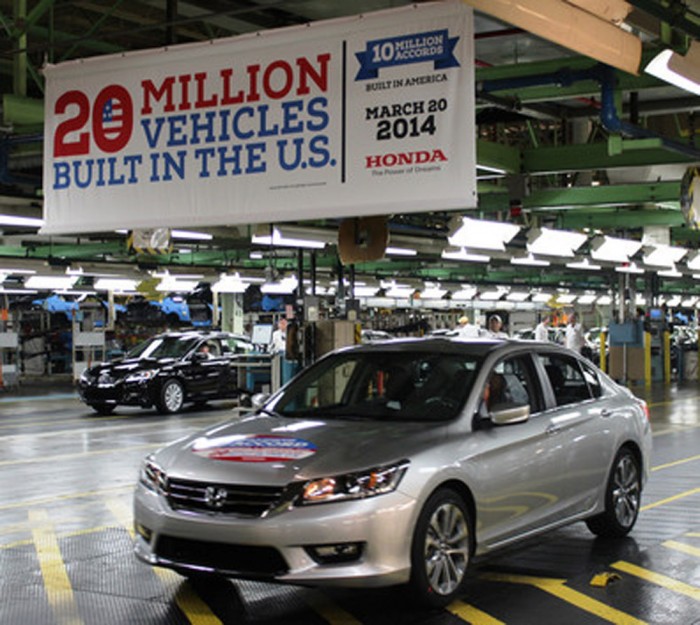 The 10 millionth Honda built in the U.S. was an Accord.

While the 20millionth Honda does have its roots in Marysville, other Honda plants have been incredibly successful as well. East Liberty Auto Plant in East Liberty, Ohio, has manufactured 4.75 million cars since 1989. On top of that, Honda Manufacturing of Alabama in Lincoln has produced 3.1 million vehicles since 2001, and 750,000 have come from Honda Manufacturing of Indiana in Greensburg since 2008, for a grand total of 20 million automobiles. The plants together have also manufactured nearly 24 million automobile engines, as well as over 18.5 million transmissions.

The plants currently manufacture 11 different Honda automobiles. These include seven light trucks and four passenger cars. In addition, Honda is currently working on a fifth plant, also in Marysville, called the Performance Manufacturing Center, which will be the exclusive global production plant for the next-gen Acura NSX.

“We are deeply aware that our ability to reach this milestone results from the trust that 20 million customers have placed in our products, and we appreciate their support over the past three decades,” commented Hidenobu Iwata, president and CEO of Honda of America Mfg. and head of Honda’s North American manufacturing. “We also value the commitment made by tens of thousands of associates at Honda and our hundreds of suppliers in the U.S. who build products of the highest quality for our customers.”