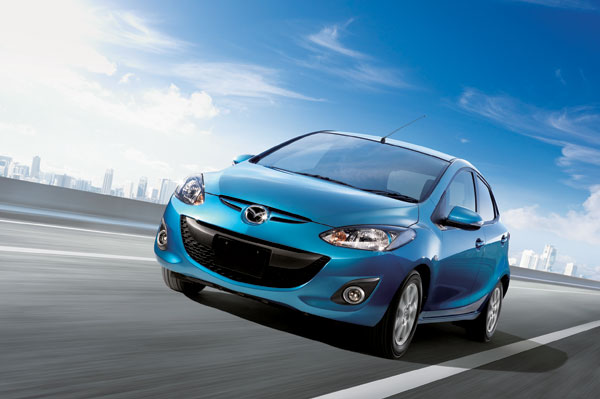 For the 2013 model year, the Mazda3 gets a few new electronic features, with a larger navigation screen and a USB audio input on most trim levels. There has also been a slight shuffle of optional and standard features.

Consumers looking at buying the front-wheel-drive Mazda3 sedan have the option of three different powertrains. The first comes with the SV model and is a 2.0-liter four-cylinder engine, which generates 148 horsepower and 135 lb-ft of torque. The five-speed manual transmission comes standard, while a five-speed automatic is optional.

The second option, which is available on the 3i Sport, Touring, and Grand Touring models, is an advanced 2.0-liter four-cylinder, also known as SKYACTIV-G, which produces slightly more power with 155 horsepower and 148 lb-ft of torque. While a six-speed automatic is optional, a six-speed manual transmission is standard.

For the 3s Grand Touring Mazda3, the powertrain of choice is a 2.5-liter four-cylinder engine that produces the most power with 167 hp and 168 lb-ft of torque. This also comes standard with a six-speed manual, with an automatic five-speed optional.

Though the 3’s interior isn’t the top in its class, its design and material quality are still outstanding, reflecting Mazda’s tendency to focus on providing as much comfort to the driver as possible. Gauges and controls are clear and easy to use, while modern red and blue ambient lighting illuminates the sedan’s cabin at night. New electronic features, such as a new navigation system with a larger touchscreen, keep occupants connected, while the seats offer plenty of comfort. The rear seat is a bit tight on legroom, but the 3 offers some extremely competitive cargo space.

Government crash testing awarded the 2013 Mazda3 four out of five stars for overall crash protection, while the Insurance Institute for Highway Safety gave the sedan their highest possible rating of “Good” in the frontal-offset, side-impact, and roof strength tests.