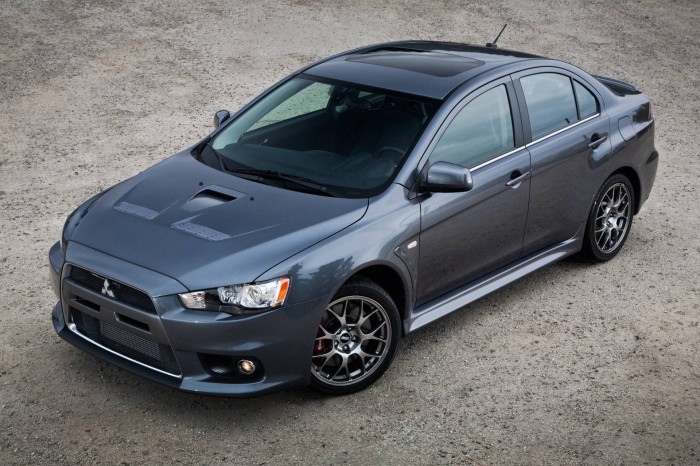 The 2013 Lancer Evolution from Mitsubishi stands out as a uniquely designed sedan with a promise to perform.

The 2013 Mitsubishi Lancer Evolution has no new changes.

Have a Great Trip: Road Trip Games to Pass the Time

In the competitive small sedan segment, the 2013 Mitsubishi Lancer Evolution easily stands out with distinctive styling features and a clean design setting it apart from its competition. The simply design grille and notably square rear create a unique profile, while the optional rear spoiler gives it a sporty look, hinting at its ability to perform.

A turbocharged 2.0-liter four-cylinder engine powers the 2013 Lancer Evolution, generating 291 horsepower and 300 lb-ft of torque. A five-speed manual transmission is the only available option on the GSR, while the MR is equipped with a six-speed automated manual transmission with shift paddles on the steering column. All Lancer Evolutions come with an advanced all-wheel-drive system.

Fuel economy for the Lancer Evolution comes in at 19 mpg combined for both the GSR and the MR.

Though the cabin design isn’t the most appealing in its class with hard plastic materials and a relatively unimpressive cabin design, it offers comfortable seating with Recaro sport bucket seats, aluminum covers for the pedals, fancier gauges, and a different steering wheel than the traditional Lancer.  The rear seats don’t fold down like the traditional Lancer either, infringing on the cargo space that is normally available in the normal Lancer.

Safety features for the 2013 Lancer include front-seat side airbags, full-length side curtain airbags, a driver knee airbag, antilock brakes, and stability control.