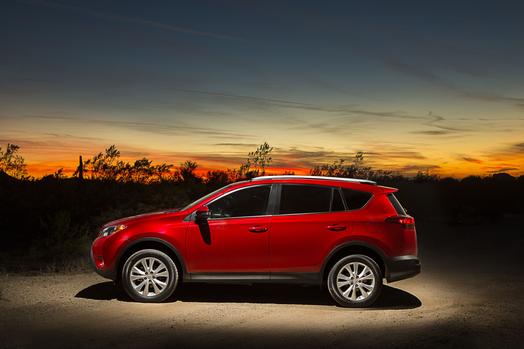 The Toyota RAV4 has been completely redesigned for the 2013 model year.

The first major change you’ll notice about the 2013 Toyota RAV4 is its rear end. Gone are the days when the SUV had a swing-out trunk door, complete with spare tire. The new RAV4’s trunk door swings up rather than out, and the tire has been relegated to under the cargo floor, like in the majority of vehicles these days. In the upper-level Limited trim, this rear door is power-operated, making it easier to open and close when your hands are full. Standard exterior features include automatic headlights, power folding mirrors (heated ones in the mid-range XLE and upper Limited trims), and rear privacy glass.

Another huge difference in the 2013 Toyota RAV4 is that it no longer offers an optional V6 engine. Instead, each RAV4 is equipped with a 2.5-liter four-cylinder engine that generates 176 horsepower and 172 pound-feet of torque. This engine is powered via a standard six-speed automatic transmission, which sends power to either the front wheels, or all four wheels, depending on which model you choose.

One good thing about Toyota dropping the V6 engine for the 2013 RAV4 is that it could concentrate on improving the four-cylinder for maximum efficiency. This motor returns an EPA-estimated 24 mpg city/31 mpg highway, and 26 mpg combined when paired with front-wheel drive. Choosing all-wheel drive will lower those numbers very slightly, to 22/29/25 mpg city/highway/combined. These numbers are impressive enough to make the 2013 RAV4 one of the most efficient vehicles in its segment.

Previously, the RAV4 was available either as a two-row or a three-row crossover. Now, Toyota offers the RAV4 only as a two-row vehicle in order to maximize interior space. Seats come covered with cloth as standard, but upper trim levels offer a leather-like material called Softex. The dash has been modernized with the addition of clean lines and more pronounced angles, while interior materials in general are higher quality than the previous RAV4. Interior space is abundant, thanks to the RAV4’s 38.4 cubic-foot cargo bay, which increases to a massive 73.3 cubic feet when the rear seats are folded down. The crossover also comes with an optional navigation system which also offers Toyota’s Entune infotainment system. Entune gives you easy access to tons of smartphone-connected services, such as Pandora, Bing searches, and sports and stock information.

Safety isn’t a concern in the 2013 Toyota RAV4. Each model comes with a comprehensive suite of airbags, including front-seat side airbags, full-length side curtain airbags, and a driver’s knee airbag. Additionally, the 2013 RAV4 comes with stability and traction control, antilock disc brakes, and whiplash-reducing front head restraints. The RAV4 received four out of five stars overall in government crash testing, with the side crash test earning five stars. The Insurance Institute for Highway Safety gave the 2013 RAV4 its highest possible rating of “Good” for its performance in roof strength, side-impact, and moderate-overlap frontal-offset crash tests.