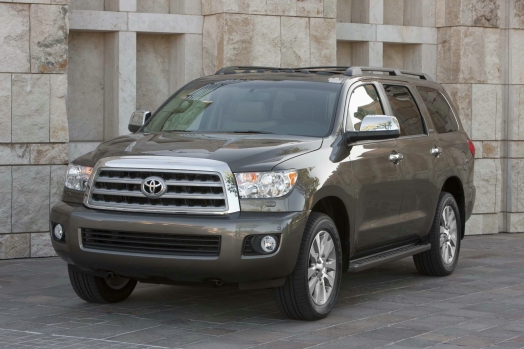 The 2013 Toyota Sequoia drops the previous model’s smaller base V8 engine in favor of the powerful 5.7-liter V8. Additionally, the 2013 Sequoia has the option of adding a rear-seat Blue-ray entertainment system.

The 2013 Toyota Sequoia looks pretty much like you’d expect a full-size SUV to look. It’s big, bold, and has a powerful stance. A large grille dominates the front end, while standard foglights allow for greater visibility during inclement weather. Each Sequoia model is well-equipped, with even the base SR5 model offering a sunroof, roof rack, heated mirrors, a towing package, and keyless entry. If that’s not quite fancy enough for your tastes, upper trim levels add auto-dimming side mirrors, chrome-clad alloy wheels, front and rear parking sensors, and a power liftgate. Not too shabby by any means.

As previously mentioned, the 2013 Toyota Sequoia drops the previous model’s smaller V8 and concentrates on the more powerful 5.7-liter V8. This engine generates an outstanding 381 horsepower and 401 pound-feet of torque, making it a menacing presence on any road. As expected, these numbers make for excellent towing, and the Sequoia can tow up to 7,400 pounds in its two-wheel drive configuration, and up to 7,100 when paired with four-wheel drive.

If you’re in the market for a truck-based SUV like the 2013 Toyota Sequoia, chances are you’re not too concerned about fuel efficiency. This is good news, since the two-wheel drive Sequoia’s numbers look a little something like this:  13 mpg city/18 mpg highway, and 15 mpg combined. If you choose a four-wheel drive model, those numbers drop to 13/17/14. Not efficient by any means, but if you need a large SUV for towing power, these numbers are fairly standard in the segment.

Any full-size SUV worth its salt boasts abundant interior space, and the 2013 Toyota Sequoia doesn’t disappoint. Its spacious interior comes with three rows, with the option of a power-folding third row available. The Sequoia can accommodate up to eight adults comfortably, with the second row reclining seats adding an extra air of cushiness to the SUV. In addition, the second-row seats move fore and aft, meaning passengers can adjust their seats to allow for additional legroom when needed—this is a rare feature in any large vehicle. Cloth upholstery is standard, but if you prefer a more luxurious feel you can easily opt for perforated leather seats with heated and ventilated function. The Sequoia offers too many interior options and features to list, but if you have children it’s worth checking out the rear-seat entertainment system if you plan on taking any long road trips.

Safety is a high priority when purchasing any vehicle, but hits particularly hard if you’re purchasing a family car. Luckily, as well as being spacious and comfortable, the 2013 Toyota Sequoia is well-equipped with a myriad of standard safety features. These features include front-seat side airbags, front knee airbags, and side curtain airbags that cover all three rows. Additionally, the Sequoia has stability control, traction control, trailer sway control, and antilock disc brakes. Safety options include a backup camera and blind spot warning.