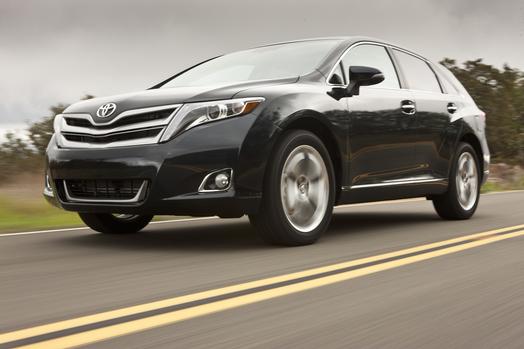 The 2013 Toyota Venza crossover wagon receives additional standard features for the model year, including blind spot mirrors in the base LE trim, driver memory functions in the mid-class XLE, and LED daytime running lights in the tricked-out Limited trim. Furthermore, the 2013 Venza gets a standard touchscreen interface across all trim levels with available smartphone-based services via Toyota’s Entune system.

The 2013 Toyota Venza was designed right here in the US of A, and its creators certainly went all out with this wagon. The Venza rides slightly higher off the road than your average car, enabling the driver to take a more powerful stance while driving. Automatic headlights, fog lights, a blind-spot mirror, and a windshield wiper de-icer come standard on every Venza model, while choosing a higher trim level or one of the available packages gives you options like a power liftgate, bi-xenon headlights, and LED running lights.

Not quite a car, not quite an SUV, the Toyota Venza combines the ride height of a larger vehicle with the maneuverability of a smaller one. Two available engines allow you to customize your ride based on your personal needs. The smaller of the two, a 2.7-liter four-cylinder motor, generates 181 horsepower and 182 pound-feet of torque, while a larger 3.5-liter V6 pumps out 268 hp and 246 lb-ft of torque. An optional towing package allows the Venza to pull up to 3,500 pounds, making family road trips a breeze. The 2013 Toyota Venza is built with a softly-sprung suspension, which makes for an ultra-smooth ride.

The Venza’s smaller 2.7-liter engine returns 20 mpg city/26 mpg highway, and 23 mpg combined, which is about average for a vehicle in this class. Adding four-wheel drive to the mix will drop that combined rating to 22. Opting for the larger 3.5-liter gives you more power without a drastic decrease in fuel efficiency. This engine gets an EPA-estimated 19 mpg city/26 mpg highway, and 22 mpg combined. That same engine paired with all-wheel drive returns 18/25/21 mpg city/highway/combined.

The first thing you’ll notice when you step inside the 2013 Toyota Venza is the seemingly endless amount of space. In fact, the 2013 Venza has 70 cubic feet for cargo space with the rear seats folded. Leave the seats up, and you’ll still get a whopping 34.4 cubic feet. Choose between cloth and leather seating surfaces, and add the available heated front seats for the utmost comfort. All models come with dual-zone automatic climate control to keep you comfortable no matter the weather, as well as a 3.5-inch LCD multi-information display.

Each 2013 Venza comes with Toyota’s Star Safety System. This includes seven standard airbags, stability control, traction control, antilock brakes, and Smart Stop Technology designed to keep you safe on journeys both long and short. Government crash tests earned the 2013 Toyota Venza an overall four out of five stars, and the Insurance Institute for Highway Safety awarded the wagon its highest rating of “Good” in its frontal-offset, side, and roof-strength tests.