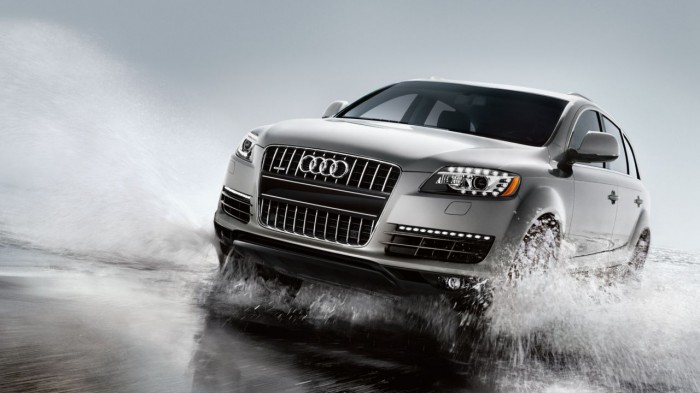 In the 2014 model year, all Audi Q7s now come with adaptive xenon headlights with LED running lights and the Premium Plus trim now has standard keyless ignition/entry.

With a coupe-like profile and muscular lines, the 2014 Audi Q7 creates a notably sporty profile that might make other SUVs a bit jealous. Subtle curves and distinct lines throughout the body create an aerodynamic figure ideal for driving at top speeds. The sleek body makes it hard to believe that there’s a third row in the cabin, while the front grille is characteristic of the Audi brand.

There are three different powertrain options for the 2014 Q7 with a supercharged 3.0-liter V6 coming standard on the Q7 3.0T Premium and Premium Plus, cranking out 280 hp and 295 lb-ft of torque, while a more potent 3.0T S line version of this engine gets a whopping 333 hp and 325 lb-ft of torque. Finally, if you’re looking for a bit more fuel economy with around the same amount of power, Audi now offers a diesel engine—a turbocharged 3.0-liter diesel (TDI) V6 that pumps out 240 hp and a health 406 lb-ft of torque. Each model comes standard with an eight-speed automatic transmission and all-wheel-drive.

The two traditionally powered engines both receive an EPA-estimated 18 mpg combined, while the diesel engine gets a much better 22 mpg combined.

A tastefully designed dashboard combined with top of the line materials create an extremely classy cabin, which is expected of an Audi. The attention to detail is apparent, with both elegant and sporty details making themselves known within the car’s interior. A driver-oriented dash and control center makes it known that drivers come first, while the MMI electronics interface has beautiful, clear graphics that are easy to navigate. The third row seating can be a bit tight, but there’s plenty of room in the front with some decent cargo space.

Antilock brakes, stability and traction control, front seat side airbags, side curtain airbags, and rear parking sensors are all standard safety equipment for the 2014 Audi Q7. The Premium Plus and Prestige trims get a standard rearview camera with the Prestige trim level also receiving a blind-spot warning system. According to the Insurance Institute for Highway Safety, the Q7 also deserves their highest possible rating of “Good” in its moderate-overlap frontal-offset and side-impact tests.