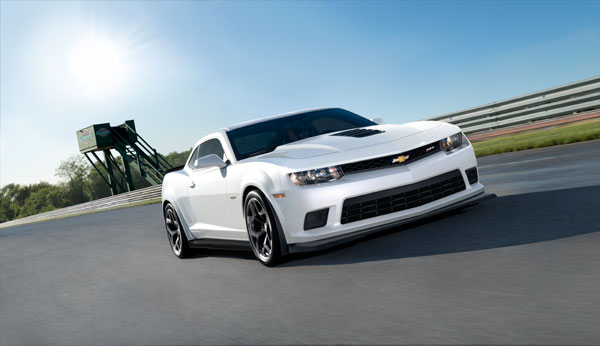 The Chevy Camaro takes on a slimmer, even more aggressive look for 2014.

What’s New for the 2014 Chevrolet Camaro

The Camaro Z/28 is back in town for 2014 with a variety of upgrades, such as a brand new V8 engine and brake updates. For 2014 the Camaro line will also get a bit of a redesign, with a wider, lower mouth, a compressed upper grille, new headlights, and other design features. Also, the SS and ZL1 coupes will now have new optional Recaro front seats.

Handsomely sculpted lines and a prominent, contemporary front façade make it known on first glance that the 2014 Camaro was born from the pony cars of yore. The low, wide stance to the ground and a wider, lower opening in the grille combine to create a much more aerodynamic car. This streamlined body allows the Camaro to easily cut through the air as it races down the road. With its muscular silhouette, there’s no doubt that the 2014 Camaro will turn heads everywhere.

Retro features combine with modern technology in the 2014 Camaro cabin, creating an overall stylish design that any muscle car lover will enjoy. The dashboard makes sure everything the driver would ever need to know is right at his finger tips, while the Head-Up Display, which comes standard on the 2LT and 2SS, gives him performance data by displaying it on the windshield, making sure you don’t have to move look away from the road for a second. Though the back seat can be a bit squished, especially for adult sized customers, the front seats are comfortable and supportive for racing around curves.