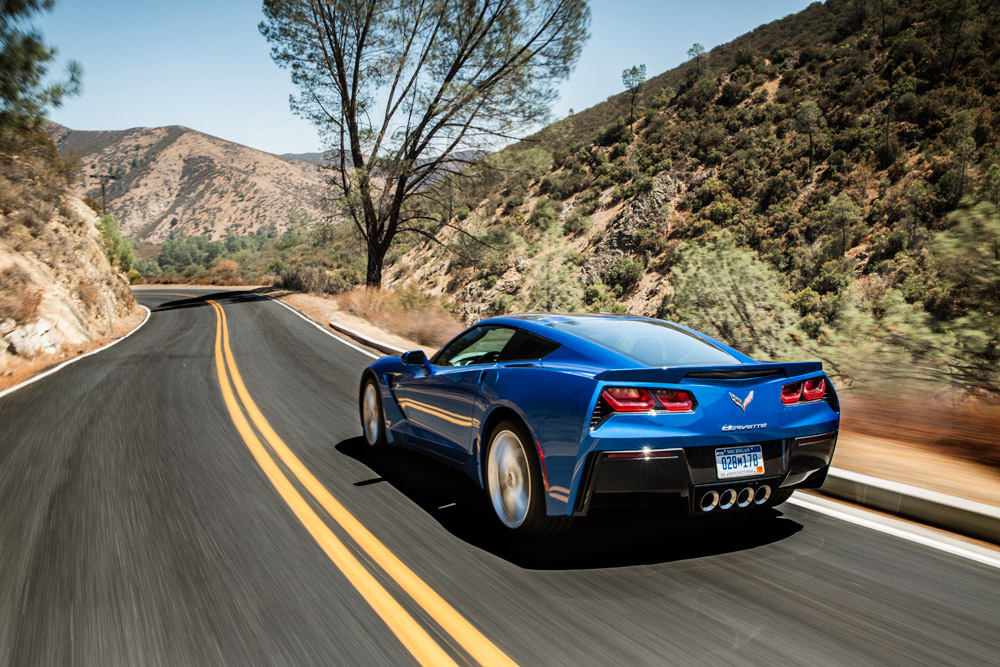 For the 2014 model year, the Chevrolet Corvette has gotten an entirely new redesign, including its name—it’s officially the Chevrolet Corvette Stingray. The interior has improved in quality while the exterior has gotten more angular. Along with these aesthetic improvements, the Corvette Stingray has more power and newer technology features than ever before and is only available in the base coupe and convertible styles.

The exterior of the redesigned Corvette was built for optimal performance with a low stance that keeps the vehicle planted to the ground. Exterior vents minimize drag and reduce lift, allowing for the car to easily eat up the road. The headlamps are shaped to create an almost sinister façade, adding a touch of intimidation to the car’s silhouette.

The 6.2-liter V8 under the 2014 Stingray’s hood adds a bit of oomph to its performance. With a maximum power output of 455 horsepower, the new powertrain adds a bit of power from last year’s model with an optional dual-mode exhaust, bringing an even bigger boost to 460 hp. The Stingray comes with both automatic and manual options, though if you’re looking for a spirited ride, the manual is the better choice.

If you’re looking for a fuel-efficient car that still gives you a whole lot of power, the 2014 model year Stingray may just have what you need. On top of the high performance features, the car also gets an impressive 21 mpg combined with manual transmission and a 20 mpg combined for the automatic. (That’s 17 mpg city and 29 mpg highway for the manual!)

This year’s interior has seen a real improvement, creating a stunning cabin that anyone would fall in love with. High quality, authentic materials, from the door trims to the instrument panel, cover each inch, while the options of Grand Touring seats or Competition Sport seats let you choose which fits you best. Add the steering wheel that is designed exclusively for the Stingray with hand-wrapped natural leather, and you just can’t go wrong with the 2014 Stingray.

Prevention is the keyword when it comes to the 2014 Stingray, using features such as Active Handling and 4-wheel antilock brakes to help you remain in control. If it is unable to prevent an accident, a 57% stronger aluminum frame structure and multiple standard airbags help protect its passengers, while OnStar assist allows for immediate assistance.