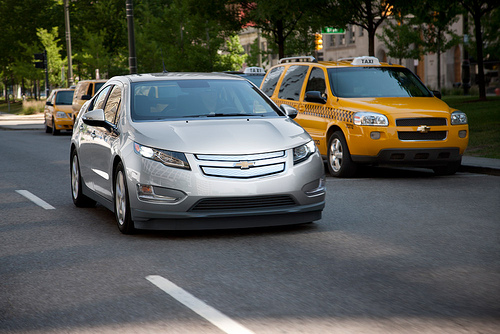 The 2014 Chevrolet Volt looks to make a big impact with a noticeable price reduction for the 2014 model year.

What’s New for the 2014 Chevrolet Volt

The 2014 Chevy Volt is a bold midsize four-door hatchback with standard 17-inch wheels and LED running lights. The Volt was designed to be a futuristic vehicle not only with its powertrain, but its styling, so even though it hasn’t undergone a redesign in a few model years, its styling is far from stale. The 2014 Chevy Volt’s unique exterior design is still causing on-lookers to double take nationwide.

The 2014 Chevy Volt was obviously engineered with efficiency in mind, but its capable performance may surprise you. The 2014 Volt is powered primarily by an electric motor that generates 149 horsepower and an impressive 273 lb-ft of torque.

Fuel efficiency is an interesting subject for the 2014 Chevy Volt, because it is able to travel 38 miles without using a single drop of gasoline – a mark that is 10-20 miles better than its plug-in competitors. After the charge is depleted, the Volt’s 1.4-liter four-cylinder kicks in to extend the overall driving range by an additional 300 miles, while returning an average of 35 mpg, according to Edmunds.com.

The design of the 2014 Chevy Volt’s interior was driven by the latest in personal electronics, so touchscreen controls are prevalent, providing a more than modern feel throughout the cabin.

Brought to you by George White Chevy, Ames, IA