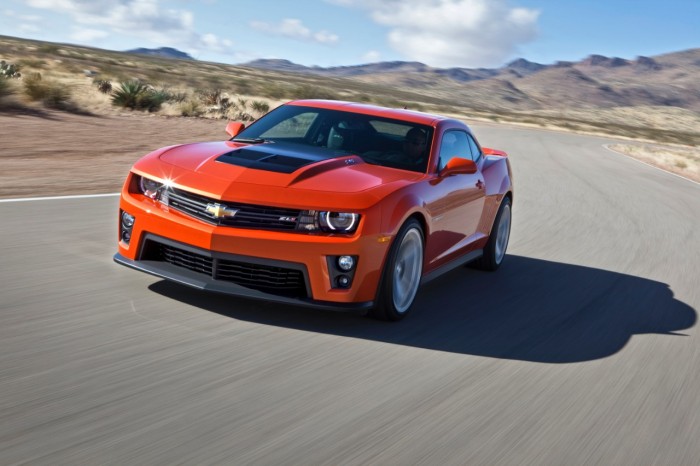 There isn’t much difference between the 2014 Camaro ZL1 and its standard sibling. Both have a low-slung body with sleek bodylines and little details, such as a rear spoiler and vertical body lines right before the rear wheels, that highlight the car’s athletic body. The biggest difference, though, is in the ZL1’s badging.

Take a deep breath to prepare yourself. Are you ready? 580. No, that’s not just some random number. That’s the horsepower the ZL1’s 6.2-liter V8 engine and six-speed manual transmission churn out. Compared to this number, the base Camaro’s 323 hp seems paltry. According to Chevy, this powertrain combines to push the ZL1 to 60 mph from a standstill in 3.9 seconds, a number that will make anyone’s jaw drop.

This powerful engine comes with a price when it comes to fuel efficiency, though it’s not as rough as you’d expect. EPA-estimated fuel economy comes in at 14 mpg city and 19 mpg highway.

Though the focus of the ZL1 is mostly on its beefy engine, its interior doesn’t suffer like its COPO and Z/28 brothers. While it still has a basic design, the chromed plastic and soft touch materials compliment the simple dash design, while the big color touchscreen display allows for easy connectivity with the outside world. Another helpful bit of design is the standard head-up display that projects vitals above the hood so the driver doesn’t need to look down in order to gain that information.

The 2014 Camaro ZL1 come standard with antilock disc brakes, traction and stability control, front-seat side airbags, and full-lenth side curtain airbags. The OnStar emergency system is also a standard feature.