The 2014 Chevy SS has honestly been twenty years in the making—or in the waiting, at least. We haven’t seen a rear-wheel-drive platform for a Chevy sedan since the Impala met its demise in 1996. So whom do we have to thank for the reincarnation of this beloved powertrain in the form of the 2014 SS? The Aussies, that’s who. 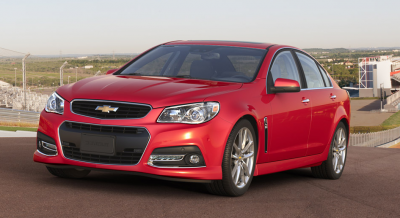 Influenced largely by Australia’s Holden Commodore and even developed by Australian engineers, the American SS has great handling and a powerful ride. The downside? Most of us probably won’t get our hands on an SS, as GM execs aren’t shooting for high figures for this performance sedan. The small numbers in which the brand plans to sell the Chevy SS likely won’t exceed four or five thousand.

At first glance, Chevy’s Super Sport looks more like a family car, with a friendly front fascia and the sedan shape we’re used to seeing families trapped inside on their vacations to Disney World. Not much about its look really says “high octane performance,” save for maybe the spoiler and exhaust tips. But appearances are deceiving…

Powered by a 6.2-liter V8, the Chevy SS throws down 415 hp and rockets from 0 to 60 in just 5 seconds. But with great power comes great responsibility (thanks, Uncle Ben!), which is why we’re glad the SS handles so well. The grip on the tires is incredible, and we also can’t get over how strong and precise the Brembo brakes are. If we had one bone to pick with the SS, it’d be that we only get a six-speed manual transmission. Maybe that’s something Chevy will reconsider for a 2015 model?

Want to know more about the revolutionary sports sedan? Forbes contributor, Matthew de Paula, who compared the SS performance to that of a “four-door Corvette,” sat down with program engineering manager for Holden, Steve Manson, to discuss the development and design process for the all-new SS in an interview you won’t want to miss.