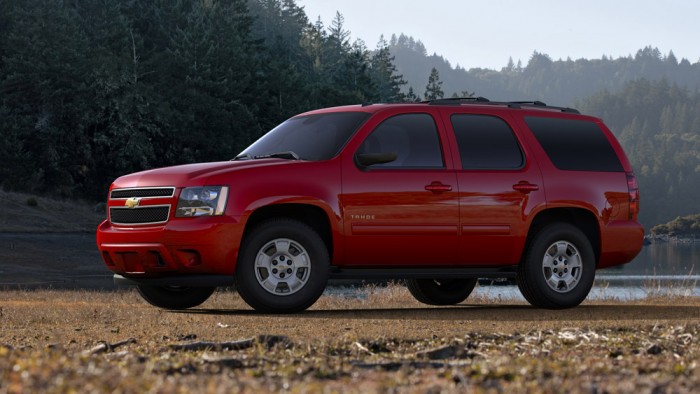 The 2014 Chevy Tahoe offers a few changes from the past year.

Because a new generation of the full-size SUV is expected to launch in the 2015 model year, there aren’t many changes to the 2014 Chevy Tahoe with the exception of a few new standard features, like power-adjustable pedals, remote ignition, a rearview camera, and rear parking sensors.

There’s no denying the traditional full-size SUV styling of the 2014 Tahoe. With a blunt nose and strong, muscular bodylines, the Tahoe is heavy-duty all the way, creating a workhorse façade that would be at home towing multiple passengers, boats and campers through all weather. There isn’t any excess flash to the exterior, but that’s what makes it a Tahoe.

While there’s only one engine option for the 2014 Tahoe with a 5.3-liter V8 churning out 320 horsepower and 335 lb-ft of torque, there is a choice of two-wheel or four-wheel-drive. With this powertrain, it takes the 2014 Tahoe about 8.5 seconds to reach 60 mph, pretty average for a full-size SUV, but it can also tow up to 8,500 pounds.

Like any other full-size SUV, the 2014 Tahoe isn’t going to wow when it comes to fuel economy, getting an EPA-estimated 17 mpg combined.

The interior of the 2014 Tahoe is very no-nonsense, reflecting the workhorse exterior with simple gauges in a straightforward cluster, a simple dash layout, and limited Bluetooth connection that only allows the driver to make phone calls. It lacks the flat-folding third-row seat of its rivals, but instead has wide, comfortable seats to fit as many as nine passengers.