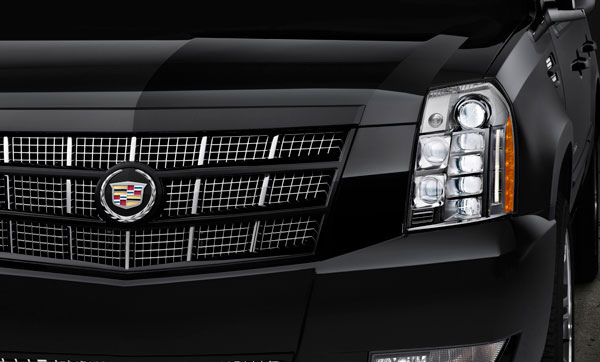 One of the key motifs in The Dark Knight is the idea of “aggressive expansion.”  Cadillac, who some speculate may be the manufacturer of the next big screen Batmobile, takes the concept of expansion to heart with the 2014 Escalade ESV.  Truly, bigger is better: a huge and luxurious cabin, seating for up to eight adults, and an additional 45.8 cubic feet of interior space make the ESV a luxurious hauler that emphasizes the idea of haul.

The 2014 Cadillac Escalade ESV is adaptable to any and all situations: tumble-and-fold-forward second row seats make rear passenger entry considerably easier, and the removal of third-row seating creates the potential for 137.4 cubic feet of storage.  The ESV is practically a Batcave all its own.

And because the ESV is a Cadillac, it features an available in-dash DVD player with two 8-inch diagonal overhead display screens with remote control and four pairs of two-channel wireless headphones.  The Platinum trim level ESV comes with all of this and the addition of two independent 7-inch diagonal DVD players set in the back of both front head restraints.

Of course, the 2014 Escalade ESV features a number of other technologically advanced standard and available features as well as instantly recognizable exterior styling.  The latest Escalade ESV definitely lives up to the idea of “aggressive expansion,” as well as the concept of go big or go home.

What does ESV stand for?  Some say it’s Entertainment System Vehicle, others say it’s Extended Version (though, last we checked, you’re missing an ‘S’ there, chief).  Our vote: Enormous, Superlative, Very.