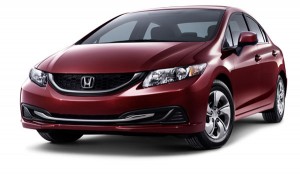 With the release of the 2014 Honda Civic Coupe and Sedan, how do you think they will compare to last year’s model?

Today, the 2014 Honda Civic Coupe and Sedan are available to the public at last, carrying a manufacturer’s suggested retail price (MSRP) starting out at $18,190 (plus tax, license, registration, and $790 destination charge) for the LX Coupe and $18,390 (plus all of the aforementioned surcharges) for the LX Sedan.

The refreshed coupe recently bowed for its adoring public at the 2013 SEMA Show.  Less than a month later, both the 2014 Coupe and Sedan are available for that adoring public to drive.

A number of styling changes for the 2014 model are intended to stress the youthfulness of the Civic Coupe’s drive and should serve to help reach a new and wider audience.  Additionally, the Coupe will feature a number of interior enhancements and available features, including 7” touchscreen Display Audio, Lanewatch blind spot monitor, and Smart Entry with Push Button start.

Brought to you by University Motors Missoula, MT