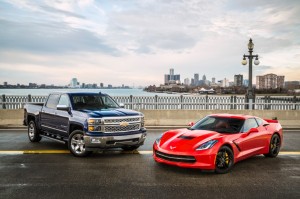 This marks the first time in the history of the 2014 North American Car and Truck of the Year Awards that Chevrolet has earned both top honors. The Silverado last won Truck of the Year in 2007, and the Corvette hasn’t won Car of the Year (surprisingly enough) since 1998.

“Chevrolet is in the midst of the most aggressive product transformation in the brand’s more than 100-year history,” said Alan Batey, General Motors senior vice president, Global Chevrolet, in a statement released Monday morning. “The Corvette and Silverado truly embody the passion, commitment and focus that is driving us to deliver the most expressive designs, innovative technologies and engaging performance in every vehicle that wears the bowtie.”

“It is a distinct honor for the entire Chevrolet team to have both the Corvette and Silverado recognized with the prestigious North American Car and Truck of the Year Awards,” Batey said.

For more information out of this year’s NAIAS in Detroit, stay tuned to The News Wheel!

Brought to you by Swant Graber Chevrolet in Barron, Wisconsin.