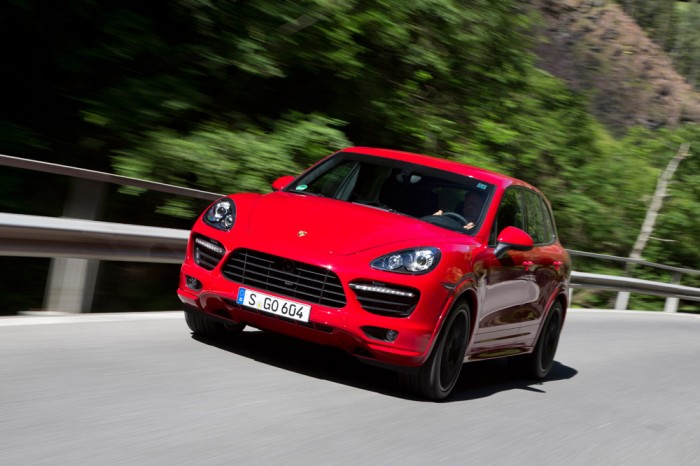 What’s New for the 2014 Porsche Cayenne

For the 2014 model year, the Porsche Cayenne will now come with a Turbo S variant that churns out 550 horsepower.

Reduced Time Until Top Luxury: Porsche Macon’s waiting list has been reduced in the US

Depending on the trim level, there are four different powertrain options. The base Cayenne comes with a 3.6-liter V6 that produces 300 horsepower and 295 lb-ft of torque. A six-speed manual is standard with an optional eight-speed Tiptronic S automatic transmission. The Cayenne also comes available with a turbocharged 3.0-liter diesel engine that produces 240 hp and 406 lb-ft of torque with a standard eight-speed automatic, which is the standard transmission for every Cayenne but the base.
A 4.8-liter V8 churns out 400 hp and 369 lb-ft for the Cayenne S, while a hybrid powertrain combines a supercharged 3.0-liter V6 and a 34kW electric motor to produce 380 hp and 427 lb-ft of torque. The Cayenne GTS has an upgraded version of the S engine, while the Turbo gets a turbocharged 4.8 liter V8 that has a superb 500 horsepower.
Every Cayenne comes standard with all-wheel drive, though there are two different types. The Diesel and Hybrid feature a permanent AWD system with a self-locking center differential, while the other models have an active AWD system that has variable torque distribution and different off-road modes.

EPA-estimated fuel economy for the 3.6-liter is 19 mpg combined for the automatic, while the manual gets 17 combined. The diesel is rated at 23 mpg combined, while the 4.8-liter gets 18 combined and the hybrid powertrain comes in at 21 combined. Both the GTS and S have the lowest fuel efficiencies with 17 mpg combined.

With high quality materials and a modern, yet elegant design, the 2014 Cayenne is marked by a luxurious interior, which is what you would expect from such a high-end car. The center console is a bit busy, though, with what seems like never-ending buttons, but the straightforward and easy-to-use touchscreen makes up for it. The rear seats recline and slide back and forth, though its cargo space is a bit lackluster compared to other vehicles in its class.

Antilock brakes with enhanced brake assist and readiness, stability and traction control, a driver knee airbag, front side airbags, and full-length side curtain airbags come standard, while available features include rear side airbags, parking sensors, a rearview camera, and a blind-spot warning system.