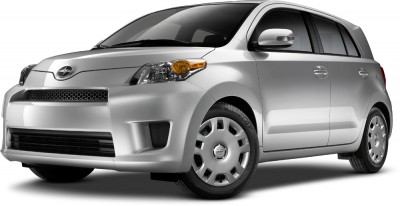 The 2014 Scion xD is a unique and efficient vehicle.

The 2014 Scion xD treads the line between wagon, hatchback, and subcompact, and it does so masterfully. The two-tone exterior paint job delivers bold curb appeal that only Scion can, and the 2014 xD’s standard 16-inch steel wheels only bolster its athletic stance.

Get the Best of the Best: Toyota has topped the 2015 Best-Selling list

The 2014 Scion xD is powered by a 1.8-liter four-cylinder engine that generates 128 horsepower and 125 lb-ft of torque, which propels the xD from 0-60 mph in 8.4 seconds – a quicker time than most competitors. Drivers have the choice between a four-speed auto and a five-speed manual transmission.

The bold styling of the 2014 xD that began outside seamlessly enters the cabin with accents of dark gray and matte-finished metallic trim. The 2014 Scion xD now comes with a standard 6.1-inch touchscreen, which sets it above its class, and additional standard technology includes Bluetooth connectivity, iPod/USB inputs, and a six-speaker sound system.