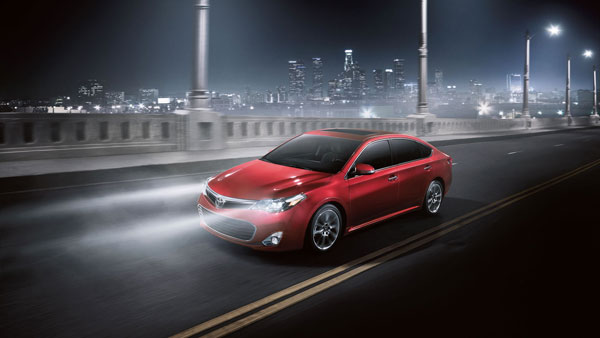 What’s New for the 2014 Toyota Avalon

With the exception of a few minor standard and optional feature shuffles, there are no big changes for the 2014 Toyota Avalon.

The 2014 Avalon is all about form and function; each design decision was seemingly made with this in mind. The curved lines and sharp edges create an aggressive design that carefully balances elegance and power. There’s no denying that this is a car that looks fun to drive.

Each 2014 Avalon is powered by a 3.5-liter V6 engine capable of generating 268 horsepower and 248 lb-ft of torque. A six-speed automatic transmission sends this power straight to the front wheels, allowing the Avalon to sprint to 60 mph in 6.4 seconds.

EPA-estimated fuel economy places the Avalon at 25 mpg combined for the XLE and XLE Premium models, while the Touring and Limited have a slightly lower mpg at 24 combined.

High-quality materials combine with comfort to create the elegant interior of the 2014 Avalon. Space is prevalent with very comfortable seats making sure everyone enjoys the ride to wherever they’re going. The Touring and Limited editions come standard with Entune, a set of smartphone-connected services like Pandora and Bing search, making it easy to stay connected and entertained whether you’re on a road trip or on the way home from work. Storage compartments are also rampant with a convenient “eBin” in the lower section of the center console with power cords that pass through a sliding panel for a variety of electronic connections.

According to government crash tests, the 2014 Toyota Avalon is an A+ student when it comes to safety, getting five out of five stars for overall crash protection. The Insurance Institute for Highway Safety agrees with the government, giving the Avalon a “Good” rating—their highest possible score.