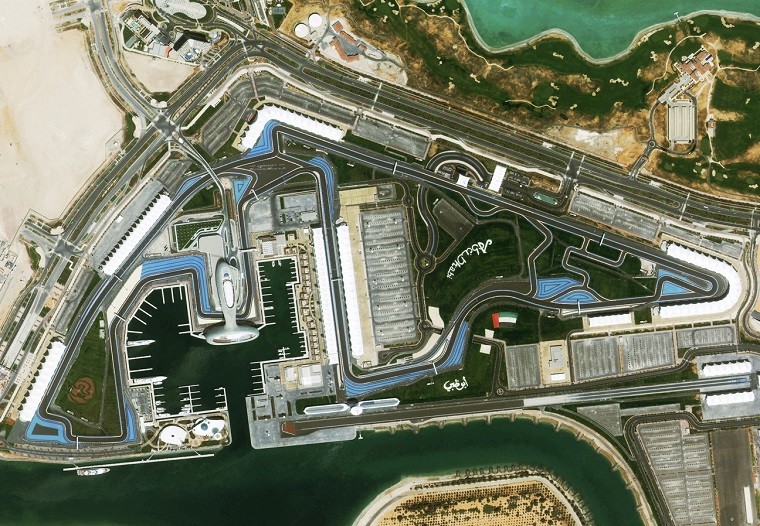 One of the prettiest tracks on the calendar.

The question on everyone’s minds heading in the 2015 Abu Dhabi Grand Prix went more or less along these lines: would Nico Rosberg be able to steal a sixth consecutive pole from Hamilton and would he score three wins in a row for the first time in his F1 career? Could he show his teammate that he had what it took to win a championship?

To put it briefly, the answer was yes, he could, grabbing both the pole and the win in resounding fashion. But one has to lament not seeing this performance out of Rosberg earlier in the season, when all of it still mattered.

Okay, to be fair, it does still matter. Competitors like Lewis Hamilton hate to lose; in fact, having won the Drivers’ Championship has not prevented him from brooding and pouting after finishing runner-up to Rosberg in the final three races. Losing gets in the heads of people who live to win. And though Rosberg had seemed subdued or even unconfident in his abilities earlier in the year, he now looks supremely cool and collected both on and off the track—even doing a few celebratory donuts after winning the race. I hope for his sake and the sake of the sport that he can carry that into the next season.

Rosberg celebrates his third consecutive win with a few donuts.

Unlike some have suggested, I doubt Hamilton’s losses can be attributed to him backing off after winning the championship. As I just said, he hates to lose—everyone in a sport like Formula 1 does—and there is still a lot of prestige in winning a Grand Prix even if they no longer contribute to the ultimate trophy. On the other hand, Rosberg’s wins could be related to the championship battle—or rather the lack of it. We’ve seen multiple times before that he cracks under pressure when the stakes are high, and his newfound confidence may have surged specifically because the fight for the title is done.

Whatever the reasons may be, he was on fire this weekend. The qualifying head-to-head had seemed close at first, until Rosberg knocked in a smashing lap that put him over three tenths ahead of Hamilton. On Sunday, he rocketed away as the lights went out and was untouchable all throughout the race, at one point extending his gap to Hamilton to more than six seconds, and managing his tires the rest of the time.

Unfortunately, the race—like the season—was a bit of a bore, which you’ll find below is reflected in the final championship results. Even though a team mistake in qualifying caused Vettel to start 15th, his rush through the pack provided no true excitement, as he raced almost immediately to the top 10 and then did most of his overtaking through pit strategy, ultimately finishing 4th.

Meanwhile, Kimi Räikkönen took the last spot on the podium to claim victory in the battle between Finns with Valtteri Bottas, whose race was ruined when his front wing was clipped under Button’s McLaren after being unsafely released from the pits. Sergio Perez was excellent all weekend long, qualifying 4th and finishing 5th, two positions ahead of teammate and Le Mans winner Nico Hulkenberg.

Bottas is released too early and pays the price.

Romain Grosjean put in a splendid performance to finish 9th in his final race for the Enstone-based team, for which he has raced since 2008, scoring enough points to finish ahead of Max Verstappen in the championship. Daniel Ricciardo outraced his teammate, but fell just 3 points short to catch up in the overall standings. Even McLaren seemed to have a decent race, with Button qualifying high and Alonso setting the 3rd fastest lap of the race after prompted to turn his engine up, though not before causing a turn 1 crash and racking up some penalty points.

Regrettably, it takes only a quick glance at the final Drivers’ Championship standings to see that something is terribly wrong: every driver in the top 10 is distributed based on his team. First the Mercedes drivers, then the Ferrari drivers, then Williams, Red Bull, and Force India, which suggests that individual skill matters a lot less than being in a fast car.

Having the right hardware has always mattered in this sport, if not in all motorsports, but the balance between skill and technology seems to be far too disproportionate as things currently stand. As if to exemplify it, Mercedes racked up 86% of all possible points, beating even the famous 1988 record, the year when McLaren won 15 out of 16 races. It’s a great achievement for the team but a deterrent to fans of the sport who want to watch close battles.

On the bright side, there are several changes coming for the 2016 season that should inject some much-needed excitement and which I’ll be writing about once some rumors and speculations have been cleared up.

So there we are—the season is over. Whether the last season was a good or bad one, having no F1 to watch over the weekend always leaves me with a sense of emptiness. But that doesn’t mean F1 content is going away! I’ll be covering the pre-season when it starts and may write a few analysis and opinion pieces as well. The racing may pause, but the Formula 1 circus never rests!