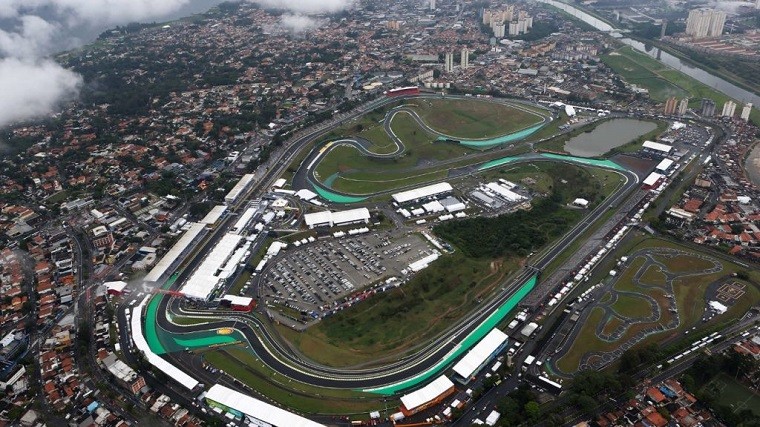 The lovely circuit from above.

If you don’t watch Formula 1 and are looking for an exciting race to grab your interest in the sport, you can skip a viewing of the 2015 Brazilian Grand Prix.

Though the moderately high altitude and changeable climate at the famous Interlagos circuit normally leads to fun, unpredictable races, it was unfortunately not the case this time around.

The story coming in this weekend was thus: Hamilton and Mercedes had already won the Drivers’ and Constructors’ championships, respectively. Rosberg had finally ended a long drought (long, considering his dominant car) by winning the Mexican Grand Prix and was coming off his fourth consecutive pole position—which he made five at Interlagos.

Though Hamilton had already won the championship, do not doubt he was going to give his all to win the race—after all, you don’t make it to the pinnacle of single-seater motorsport without being hyper-competitive, even when you don’t need to be. Additionally, Hamilton has never won in Brazil in his now nine-year career in F1, despite having driven a race-winning car each season. And as we’re told time and time again by the boys over at SkyF1 who keep comparing the drivers, Hamilton would really like to emulate Senna, his childhood racing hero and, as it happens, a Brazilian who has won at his home Grand Prix many times.

Max Verstappen had the overtake of the day, though there weren’t that many to begin with.

Rosberg also had incentive to win besides his usual rivalry with Hamilton, as with just two races to go, Vettel was dangerously close to him in the Drivers’ standings. The same went with Räikkönen and Bottas, both of whom have clashed with each other twice in the last three races and are fighting hard for the 4th spot in the championship.

Unfortunately, as I said before, not much happened. Mercedes once again sealed the front row of the grid in qualifying with Ferrari just behind them. And none of those top four cars ever overtook each other at any point during the race. In fact it could be said that one of the most entertaining moments of the weekend was when Alonso was spied sunbathing after his McLaren broke down in qualifying, with the wind blowing in his hair as though he were posing for a L’Oréal photoshoot.

Hamilton was actually quite unhappy about the race, voicing discontent during the podium interview that it was “impossible” to pass at the circuit while following a car with similar speed. The current formula certainly does have its problems with dirty air, but tell that to Max Verstappen, Mr. Hamilton.

Then again, Maldonado tried a similar maneuver himself but without as much success, unless you count ruining the other guy’s race a success.

The Maldozer doing what he does best.

There are a few more battles to look out for before heading to the final Grand Prix at Abu Dhabi. Räikkönen and Bottas are separated by only 1 point, Verstappen and Grosjean by 0 points, Kvyat and Ricciardo by 10 points, and Button and Alonso by just 5 points. The latter two duels are the really important ones, as many say that a driver’s first job in Formula 1 is to beat the guy running the same hardware.

There’s also a battle between Lotus and Toro Rosso for 6th place in the Constructors’ Championship with only a 7-point gap between them, and a 9 point gap between Sauber and McLaren—though based on their performance this year, I doubt McLaren will catch up.

I’ll see you in two weeks for the Abu Dhabi and season recap!