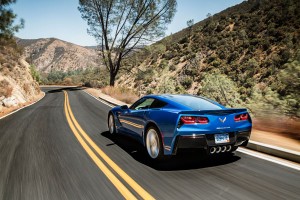 The 2015 Chevrolet Corvette Z06 will make its debut at the North American International Auto Show in January. How do you think it will compare to this 2014 Corvette?

Chevrolet just announced that the long-awaited 2015 Chevrolet Corvette Z06 will be introduced to the public at Detroit’s North American International Auto Show next month. The American automaker is touting the performance car as “the most track-capable Corvette ever, designed to deliver supercar levels of performance through unique powertrain, chassis, and aerodynamic features.”

The 2015 Chevrolet Corvette Z06 will round out Chevrolet’s awesome performance lineup for the 2014 year, which will star four new, amped up models:

Chevy’s performance lineup is easily the most popular in America, but not just of American brands. The Corvette and Camaro combination is a major threat to foreign automakers here in the States, one that has not gone unnoticed. In fact, in the first eleven months of this year, Chevrolet has accounted for one in four of every performance vehicle sold in the Unites States. Specifically, the Corvette beat out its closest competitor, the Porsche 911, while the Camaro dominated the competition against the Ford Mustang.

“Chevrolet is America’s favorite performance car brand, and for 2014 we are going to offer enthusiasts more choices than ever before,” commented Alan Batey, senior vice president, Global Chevrolet. “No other manufacturer will be able to match the breath of performance cars from Chevrolet.”

And we have a feeling he’s right.