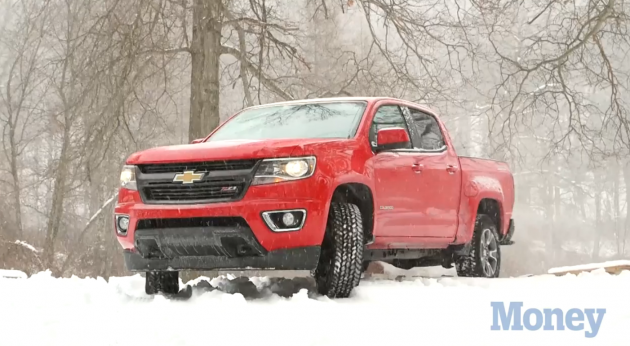 The blizzard that hit New York wasn’t quite devastating enough to justify all of the ridiculous media coverage it garnered, but the storm did leave a lot of snow on the ground. So Bill Saporito of TIME magazine took advantage of the opportunity and showed off the 2015 Chevy Colorado Z71 4×4’s off-roading capabilities in a new video.

With the four-wheel-drive system set to “4 low,” Saporito had no difficulty climbing up a snow-covered hill. Then he made it back down the slippery slope with ease, too.

Saporito said his 4WD Z71 Crew Short Box had a price tag of $36,710, which he considered a value deal compared to more expensive full-size pickup trucks. He also praised the truck’s intuitive touchscreen, positioning the Colorado as a high-tech pickup that fits an urban environment perfectly.

“One of the themes of the Colorado could be that it gives you less, but in a good way,” Saporito writes. “It’s about six inches narrower than its full-size siblings. That might not mean much in rural areas, but in the city it’s the difference between nimble and not. Squeezing past double-parked cars in Manhattan’s crowded streets was relatively easy.”