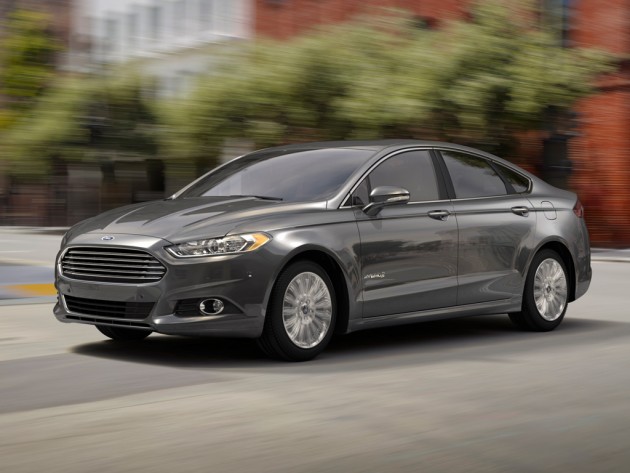 It’s easy to get hung up on the Aston Martin grille, but the 2015 Ford Fusion Hybrid offers a lot more than just a fancy front nose to make it feel and look like an upscale European luxury sedan. Aggressive headlights and thin taillights, multiple unique wheel designs, and vibrant color palettes make it so the Fusion Hybrid isn’t just a standout but also one you can make your own.

The 2015 Ford Fusion Hybrid is powered by a 2.0-liter four-cylinder engine paired with an electric motor, which gets it juice from a lithium-ion battery pack. Combined output adds up to 188 horsepower and 129 pound-feet of torque, routed to the front wheels through a continuously variable automatic transmission (CVT).

The 2015 Ford Fusion Hybrid gets 44 mpg in the city, 41 mpg on the highway, and 42 mpg combined. Just like with a normal car, you fill up your tank at the gas station—the engine takes care of charging the battery.

The 2015 Ford Fusion Hybrid boasts an attractive cabin whose only disadvantage is the relative lack of space compared to some competitors. Cargo room is reduced somewhat because of the battery pack, down to 12.2 cubic feet. Extra convenience is added by means of the MyFord Touch infotainment system. The Fusion Hybrid also uses recyclable or renewable seat fabric and foam.

More from Ford: Ford: The Only Automaker to Make the 2015 World’s Most Ethical Companies List