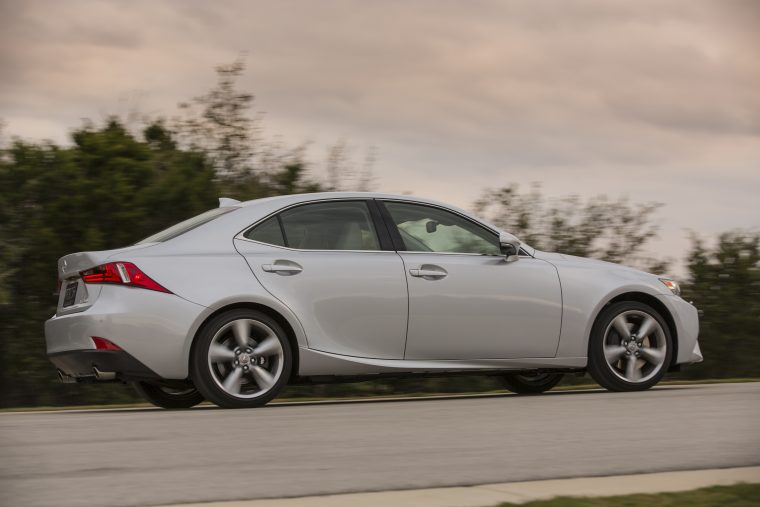 The 2015 Lexus IS features a daring, aggressive design. The front end stands out thanks to the signature spindle grille, and the stretched wheelbase and wider stance not only enhance stability but also give the IS a more mature and balanced look on the road. Underbody panels and vortex generators on the outside mirrors and taillights help improve aerodynamics.

The 2015 Lexus IS 250 model derives its power from a 2.5-liter V6 matched to a six-speed automatic, which produces 204 horsepower. The IS 350 uses a 3.5-liter V6 that produces 306 hp and 277 lb-ft of torque and uses a Sport Direct Shift automatic transmission integrated with an advanced G-force Artificial Intelligence system to choose gears intuitively for enhanced smoothness and performance. The 5.0-liter V8-powered IS F is conspicuously absent fron this year’s lineup.

The 2015 Lexus IS features a driver-oriented cockpit inspired by the Lexus LFA supercar. The ergonomic dashboard is divided into a display zone and an operation zone to enhance comfort and accessibility. Though the emphasis is on the driver, all passengers will enjoy the dual-zone automatic climate control, Mark Levinson® Premium Surround System, and increased rear seat roominess.

The 2015 Lexus IS comes standard with anti-lock brakes, traction and stability control, ten SRS airbags—including front and rear side airbags and side curtain airbags—as well as active safety technologies like Pre-Collision System with Adaptive Cruise Control and Brake Assist.