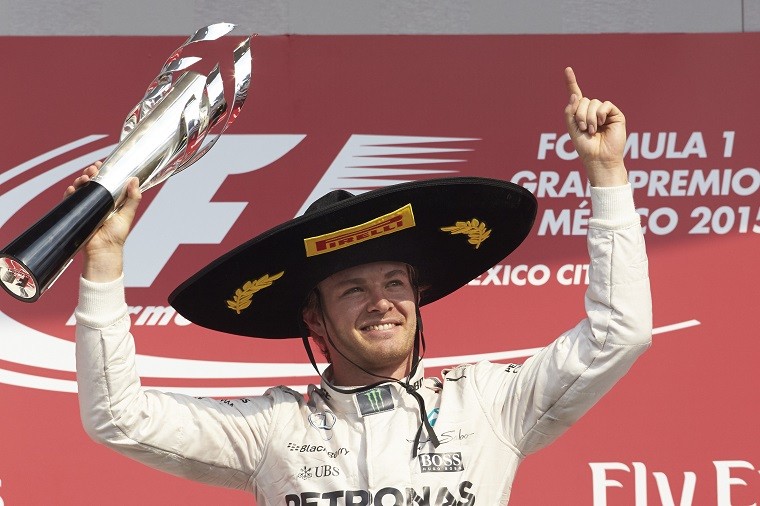 Rosberg enjoys his victory under the shade of a sombrero

The 2015 Mexican Grand Prix at the Autódromo Hermanos Rodríguez in Mexico City was the first Grand Prix to take place in Mexico since 1992.

It was one of several new venues to recently return to the Formula 1 calendar. Last year, the Austrian Grand Prix made a comeback after an 11 year hiatus and the Russian Grand Prix was hosted for the first time since 1914.

All three tracks were redesigned with the modern characteristics of the sport in mind, but I have to say, the Mexican Grand Prix easily blew the others away. In fact, I’d go so far as to claim that for the spectators, it may very well be one of the best races to attend all year round.

Most of the stands offered an incredible view of several key corners, unlike many tracks which only show one, and the stadium section was nothing short of remarkable, especially during the podium ceremony. 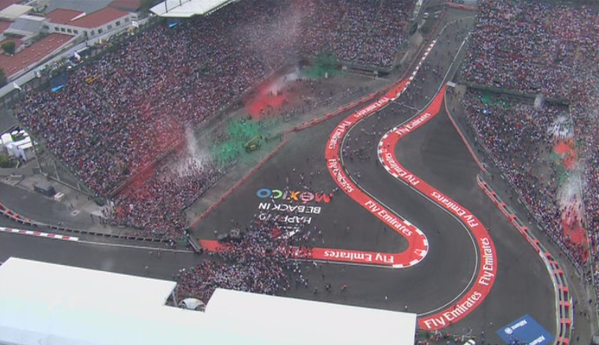 The stadium complex provides a great view of the action and of the podium.

The track itself has a unique feature that made the race more interesting: its altitude. Located at 7,380 feet (2249 meters) above sea level, the Autódromo Hermanos Rodríguez is higher than any other track on the calendar, with thin air that gives team engineers a whole new set of challenges—and headaches.

The turbochargers spin faster, putting stress on the machinery and on the MGU-H hybrid system, which loses regenerative efficiency as a result. The engine also relies heavily on air-cooling, but with about 22% less air, that’s a lot harder to achieve.

And it’s not just the engine. “All the other air-dependent systems, whether it’s brake cooling, engine cooling, gearbox, are going to struggle,” explained Paul Monaghan, chief engineer at Red Bull Racing. “In terms of running the car, we’re got to work with less air.”

On the upside, there was a bonus: less air means less drag, which means higher top speeds even with higher downforce setups. In fact, by the end of the race, Massa had clocked the highest top speed of the season—a feat normally reserved for Monza.

Speaking of the race, Rosberg managed to score himself a pole position for the fourth consecutive time—but as we know from previous races, that hasn’t really meant much for the German driver, whom his teammate tends to push over in the first corner.

Not this time. Rosberg got a clean getaway, and by the time DRS was enabled, he had built a gap over Hamilton that was sufficient enough to prevent any overtaking attempt. He controlled a 1-3 second gap during the entire race, even after a safety car period, and finally took the win that had eluded him ever since the Austrian Grand Prix. Hamilton arrived cleanly in 2nd place to score Mercedes’ tenth 1-2 finish of the season. 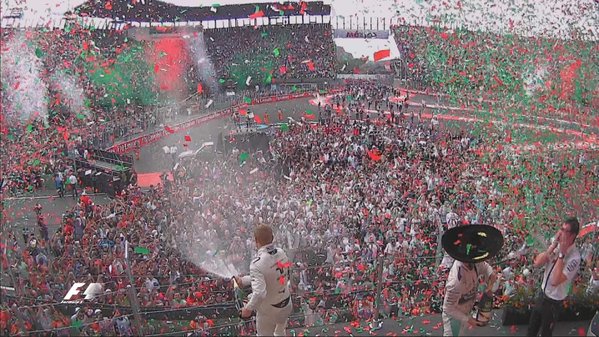 Seriously, look at that the view from that podium

However, the customary podium—normally completed by Vettel—was not to be. The four-time World Champion was unusually out of sorts during race day, and after several mistakes crashed out of the race for the first time since the 2010 Turkish Grand Prix, ending his record streak of 105 races without a crash. An even bigger record streak was ended when Räikkönen was forced to retire after colliding with Bottas, marking the first time both Ferrari cars failed to classify in a Grand Prix since the beginning of 2006.

Other than that, it has to be said that most of the excitement of the 2015 Mexican Grand Prix was rooted in the technical challenges the engineers had to face and the beautiful and novel venue that Mexico built for the race. I should also mention that the crowd was one of the best I have seen as well. The racing itself was somewhat uninteresting, but that happens. Not every race can be a constant nail biter like the United States Grand Prix last weekend.

There was some notable fighting between the Red Bulls and the Williams, though most of it was done through the pits rather than on the track, except when Bottas got past both Ricciardo and Kvyat on the long main straight, where his Mercedes-powered car would be expected to have the advantage anyway.

It’s two weeks till the next Grand Prix, taking place at the iconic Interlagos circuit in Brazil. See you then!