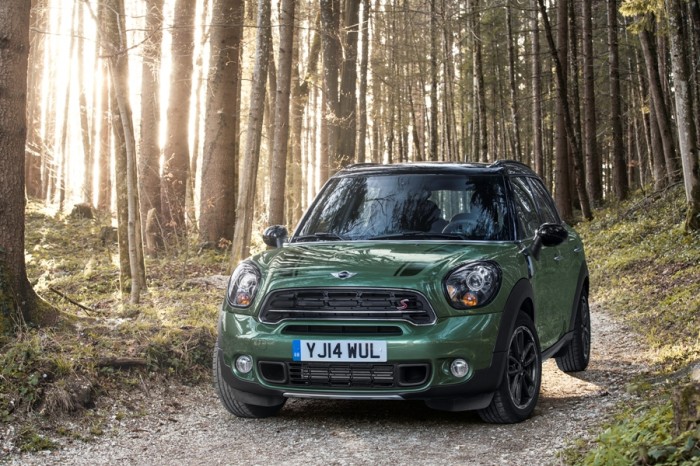 The new 2015 MINI Countryman has been unveiled at the 2014 New York International Auto Show (NYIAS), and despite known for producing cars that are…well…somewhat miniscule in scale, the brand’s four-door crossover is anything but.

The refreshed Countryman represents the next steps in the evolution of the brand’s crossover, originally launched in 2010 to a great deal of acclaim. The cosmetic changes are relatively minor both inside and out, the most noticeable of which is the Jungle Green Metallic paint scheme and the presence of the newest generation of the MINI Connected infotainment system.

The 2015 MINI Countryman will get the standard variety of available powertrain options. MINI is offering a 1.6-liter naturally aspirated four-cylinder, the 1.6-liter turbo-four, the 1.5-liter turbo-three, and BMW’s 2.0-liter twin-scroll turbo-four, all of which can be mated to either a six-speed manual transmission or the paddle-shift automatic. MINI ALL4 all-wheel drive is available, as is front-wheel drive.

MINI touts the Countryman’s safety, and with good reason: it has been awarded the Insurance Institute for Highway Safety’s (IIHS) Top Safety Pick award in each of the past three years, and the brand anticipates that it will be much of the same story in 2014 testing.

In the end, things are mostly business as usual with the new Countryman, and it will likely receive a complete overhaul to incorporate MINI’s new design platform sometime within the next couple of model years. Provided that the Countryman is MINI’s second best-seller behind the hardtop, it’s not likely that the lack of new bells and whistles will deter most MINI enthusiasts.

How’s the 2015 MINI Countryman look to you? Leave a comment and let us know where you lie.