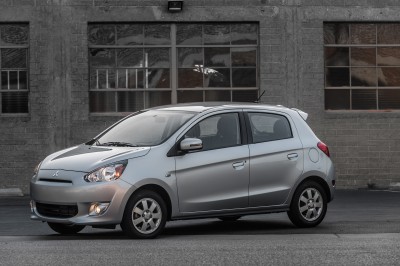 This might be the upset to end all upsets: the 2015 Mitsubishi Mirage is the most fuel-efficient non-hybrid new car on the market today with an EPA-estimated 40 combined mpg. Add that to the fact that it’s the third most affordable new car in America (though many would argue that it is far and away the cheapest), the Mirage finds itself squarely in the position of favorite for those looking to buy a new car that won’t set their finances back a country mile.

The 2015 Mitsubishi Mirage holds 9.2 gallons of gasoline at a time, and ABC tested it at around a 340 mile range before a fill-up was necessary.

If you prioritize fuel efficiency and affordability above all other aspects of a new car, the Mirage might just be the right choice for you.

Looking to Check Out the 2015 Mirage? See Mitsubishi’s National Incentives