2015 Mustang 50 Years Convertible to Be Raffled at Woodward 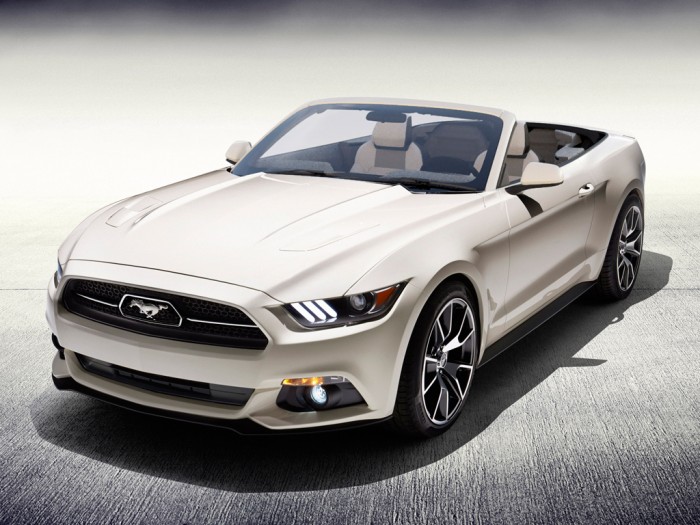 As part of their ongoing partnership with the National Multiple Sclerosis Society, Ford will raffle off a one-of-a-kind 2015 Mustang 50 Years convertible later this summer. The one-off convertible version of the 50 Year Limited Edition model announced last month will go to one lucky ticket holder in a ceremony held in—appropriately enough—Mustang Alley on August 16 during this year’s Woodward Dream Cruise.

“We’re thrilled to be able to work with and help The National MS Society again,” said Raj Nair, Ford group vice president, global product development. “As pleased as we are to be able to help financially with the Society’s No Opportunity Wasted research project, we also feel it’s important to help raise greater awareness of this terrific program. That we’re creating one – and only one – Mustang GT 50 Years convertible for the Society shows how much we respect and support their efforts.”

There won’t be much differentiating the 2015 Mustang 50 Years convertible from its fastback brethren aside from…well…the fact that it’s a convertible. The convertible will get the same Wimbledon White exterior, chrome accents, two-tone leather seating, and unique badging as the limited edition Mustang. It will also boast an instrument panel badge engraved with the signature of Ford Executive Chairman Bill Ford and the 0001 of 0001 serial number.

Raffle tickets are on sale now for $20 through the National MS Society, Michigan Chapter and Ford Motor Company. Tickets can be reserved by telephone at 1-800-243-577 (from 8am-8pm EDT Monday through Friday) or by visiting www.ford4ms.com.

We’re less than 100 days away from this year’s Woodward Dream Cruise, which also happens to be the event’s 20th anniversary. Stay tuned for more information on the Cruise and the winner of the 2015 Mustang 50 Years convertible as summer arrives (at last)!

More Mustangs You Wish You Owned: