2015 Mustang Convertible Gets Topless Faster, Is Product of Spring Break

It’s nearly April 2014, which should probably just be dubbed the Month of the Mustang. The month will mark the 50th anniversary of the beloved muscle car that has defined American culture ever since it debuted in New York. As such, we’ll probably all spend a bit of time looking back at the Mustang’s past this month, including our favorite models from the last 50 years. But before we get all nostalgic, I think we owe it to ourselves to look ahead to the Mustang’s future, starting with the 2015 Mustang convertible. 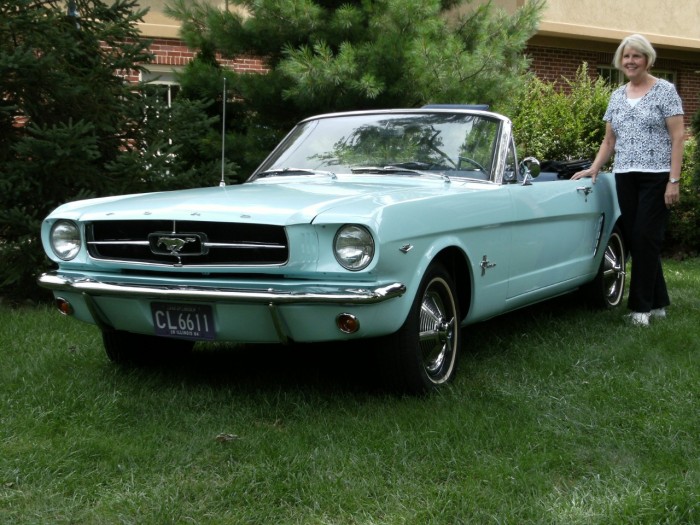 Mustang History: Gail Wise with the first Mustang ever sold

Ford recently announced that the 2015 Mustang convertible has axed top-down time in half, meaning when you’re desperate for some sun, you’ll get that sun stat—and more importantly, when the sun suddenly disappears and the rain begins to pour in a matter of milliseconds (or does that just happen here in Ohio?), you can get that top back up much faster. And it’s all done with one quick movement. The single latch is center-mounted and easily accessible for a one-touch motion. Ford also promises that the electric drive system responsible for raising and lowering the roof is “quieter than the previous electro-hydraulic design.”

“When you’re sitting in the driveway or at a traffic light and you decide you want to enjoy some sunshine, you shouldn’t have to wait around for the top to lower,” said Dave Pericak, Mustang chief engineer. “Our team worked to engineer a retractable roof that gets out of the way or closes up quickly and quietly.”

Even without the removable top, the 2015 Mustang convertible is distinguishable from the fastback version that we’ve all been drooling over since it debuted in December. Ford reports that both variants were “designed and engineered from the ground up,” which led to distinct, albeit subtle, differences between the two.

“From the start, we committed to giving Mustang convertible a unique look from the fastback with the clean, cohesive design it deserved ,” said Joel Piaskowski, exterior design director. “From the raised and straightened muscle line on the rear haunches to the recontoured trunklid, the new Mustang convertible has a more linear quality whether the top is up or down, giving the car its own distinct presence on the road.”

The 2015 Mustang convertible marks another first for the American muscle car. The convertible roof will receive a full fabric outer layer and a full inner headliner that encloses the five-bow structure. And situated neatly in between these two layers is a full 10-millimeter thick insulation pad meant to keep the inside of the convertible nearly as noiseless as the fastback Mustang, when the top is up.

“A great deal of effort went into details such as the shape of the rear quarter windows so that they could drop completely out of sight when the top is down,” commented Piaskowski. “The top system was carefully refined to prevent unsightly folds or ‘ears’ at the rear corners of the roof when it’s up.”

Other notable mentions for the 2015 Mustang convertible include the following:

“Convertible tops and iconic sports cars like Mustang have always been a great pairing,” said Pericak. “This is the best convertible we’ve ever built with a one-of-a-kind design that is instantly recognizable as Mustang and an outstanding all-around driving experience.”

Can’t get enough of the Mustang? Keep up with the latest news and updates here at The News Wheel.