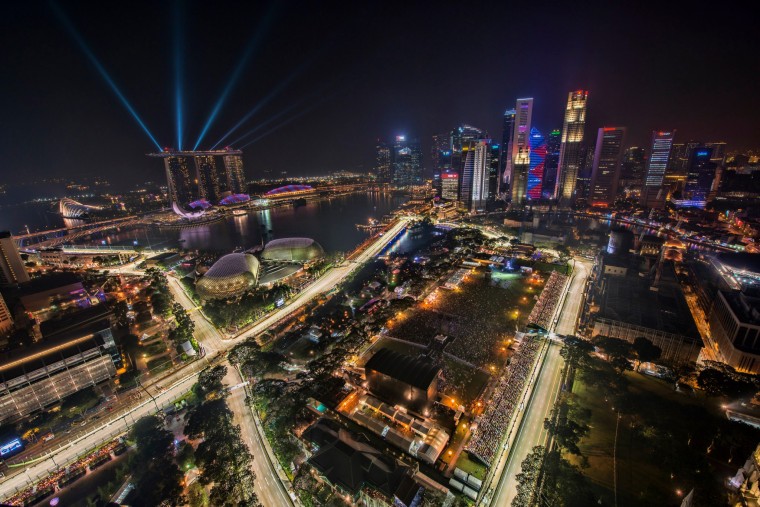 The 2015 Singapore Grand Prix was a dramatic and bizarre event. That’s the best way I can think to describe it. Though many things happened as expected, even more did not, and there were quite a few disgruntled faces on the paddock this weekend.

There were also many happy faces, though most of those were concentrated in the same place: the Ferrari garage. That was because on Saturday night, Vettel set a blistering fast qualifying time to grab pole by around three quarters of a second.

Mercedes was inexplicably slow—perhaps because of the team’s inability to bring its tires up to temperature—leading to its worst qualifying performance since the start of the new engine formula. In fact, Vettel’s pole marked the first in 2014 and 2015 that wasn’t powered by a Mercedes engine. Some conspiracy theorists say it has to do with the tire controversy that sparked up at the Italian Grand Prix, but I find that very unlikely.

Read More: Check out what happened earlier this month at the Italian Grand Prix

Ricciardo settled into second place on the grid, followed by Räikkönen, Kvyat, Hamilton, and Rosberg. Nothing major happened to the top three qualifiers on race day: they simply got away at the start, never really got close enough to each other to try overtakes, and finished on the podium in the same order. 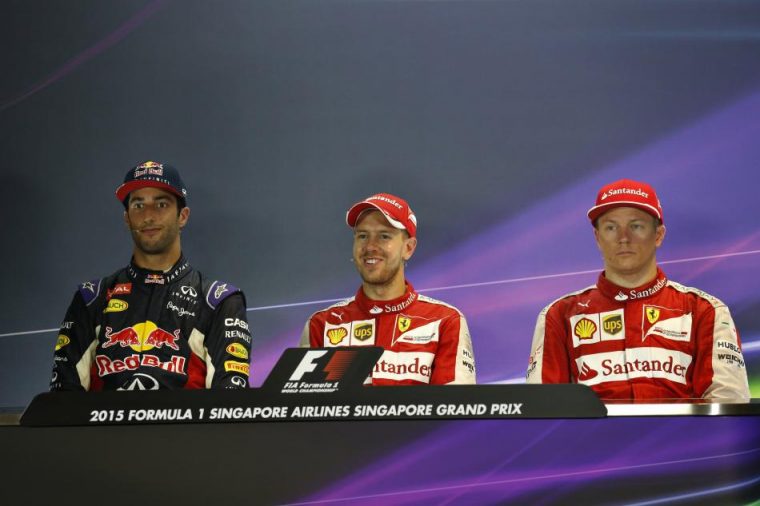 Behind them, things were a little more… bizarre. All sorts of things just kept going wrong. The safety car came out after a clash between Hulkenberg and Massa, bringing everyone close together again. Later, a spectator was seen walking on the track and the safety car was deployed once more. Hamilton suffered his first retirement of the season following a sudden loss of engine power. Several pit stops went wrong and something odd kept happening on what SkyF1 dubbed “neutral ground,” the part of the track beneath which one of Singapore’s metro lines is located and which appeared to interfere with the cars’ electronic systems. 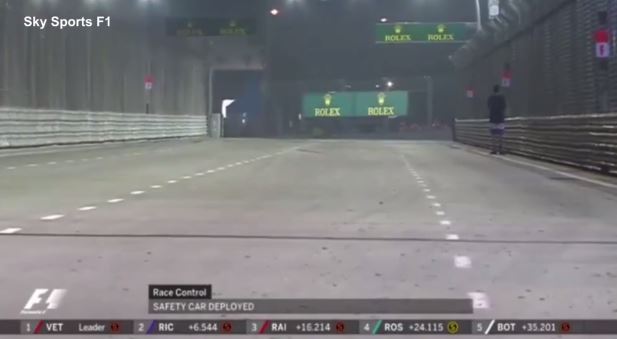 Seriously, what was this guy doing?

But apart from all that, the race was mostly uneventful—well, except for Verstappen, who continued his streak of pulling off an atypical overtake at each race. Button was working toward a points finish when he ran into Maldonado (not the other way around, surprisingly), but the time lost by having to replace his front wing ultimately made no difference as a gearbox issue forced him to retire anyway. His teammate had already suffered the same fate 20 laps before, meaning that McLaren once again failed to finish the race with either car, at a track where its engine weakness should have been minimized.

Relive the Moment: Dig into this year’s Belgian Grand Prix

All in all, Vettel reduced his gap to the championship lead to 49 points and Rosberg, who finished 4th, reduced his to 41 points. That’s still a pretty demoralizingly large gap given his teammate’s impressive form throughout the season and that there are only five Grand Prix remaining to make it up. Vettel is now also threatening to take 2nd place in the Driver’s Championship from Rosberg. That being said, the sport is unpredictable. It could take just two races to completely alter the standings between the top three drivers.

We’ll see how that develops and whether the conspiracy theorists are right at the Japanese Grand Prix in Suzuka, one of the most famous tracks on the calendar and one that should suit the Mercedes car quite well. And fortunately, we don’t have to wait very long! See you in just one week!