2015 Tahoe and Suburban Color the Rainbow

The color of your car can say a lot about you, whether you’re looking to stand out with a nice, bright yellow or fit in with a sleek silver shade. It’s always great to have options when picking your car’s color, especially when you’re trying to find the perfect shade for you—that’s why the eight revamped shades offered for Chevy’s 2015 Tahoe and Suburban make the already spectacular SUVs even more so.

Introduced at the Orange County Auto Show early in October, the full-size SUVs automatically made a big splash, rea 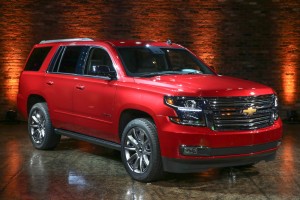 With an all new, refined interior and a more sculpted body, the all-new Tahoe and Suburban are more appealing than ever before. The Suburban, which comes in at 19 feet long, is one of the longest cars out on the road, providing plenty of seating for the entire family, along with a simple, yet exciting change—more USB charging ports, enabling everyone to plug in at once.

The new Suburban and Tahoe will be available in showrooms everywhere in early 2014. Pricing has yet to be announced, so be sure to check back to the News Wheel for that update!