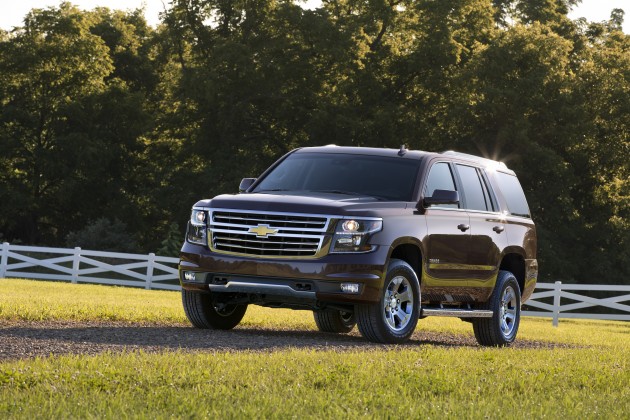 The 2015i GM SUVs, including the Chevy Tahoe, will introduce a number of updates.

The 2015i GM SUVs are about ready to hit the market, and with them, they’ll carry an abundance of new goodies. The “2015i,” of course, refers to interim model year, whereas some automakers will do something along the lines of “2015.5.” The interim GM SUVs receiving updates include the Chevy Tahoe and Suburban; the GMC Yukon, Yukon XL, and Yukon Denali; and the Escalade and Escalade ESV.

So what can we expect from the 2015i GM SUVs? Specifically on the Chevy Tahoe and Suburban, the OnStar 4G LTE Wi-Fi hotspot has been added, including a 3-month/3GB trial, to the LT and LTZ models. The SUVs also now boast Siri Eyes Free and Text Message Alerts (LT and LTZ via Chevy MyLink), as well as wireless charging for cell phones (LTZ, though available for the LT via the Luxury Package). The innovative hands-free power liftgate is also added for the LTZ model and is available via the same Luxury Package for the LT. Drivers can also opt for a new exterior color for the SUVs, Brownstone Metallic.

A Z71 Off-Road Package and Texas Editions are now available. The former can be added to four-wheel-drive LT models and the latter to LT and LTZ models.

Changes for the GMC and Cadillac SUVs are similar.