Sebastian Vettel charges ahead of Mercedes

And we’re back! The 2016 Formula 1 World Championship is on and fortunately for us, there’s already a lot more action than in 2015: a strong Ferrari start, a classic finish, teammate battles, a frightening crash, and an incredible 6th place finish for the new Haas F1 team! But before we go over what happened in the race in detail, let’s start with the events that occurred on the day before, on Saturday. 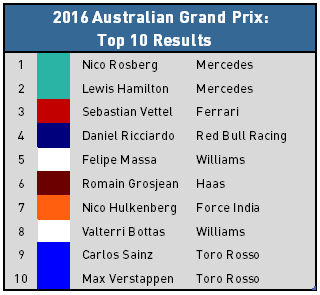 Qualifying Everyone Wants to Forget

To put it as simply and as accurately as I can, qualifying was an utter disaster. Three weeks before the season began, the FIA approved a new qualifying format whose implementation at the 2016 Australian Grand Prix would make even a toddler question the intelligence of the members on the FIA’s strategy council. It works mostly like the current format, except that instead of eliminating a set amount of slow drivers at the end of each of the three sessions, it instead eliminates the driver currently last in the standings, first after a few minutes and then every 90 seconds.

The problem with this became apparent within minutes of the first qualifying session. The drivers who set a poor first qualifying attempt didn’t have the time to go back to the pits, change tires, do a warm-up lap, and then complete a full hot lap to try and and improve—the clock simply didn’t permit it (and Melbourne’s Albert Park circuit is one of the shortest on the calendar). At the same time, those who had set a good first qualifying lap had no reason to go out again to try to improve. As a result, in Q3 on Saturday—the final and theoretically most exciting qualifying session—drivers were already pitting or getting out of their cars with four minutes left to go until the checkered flag. I feel bad for the Australian spectators who paid for a ticket that day.

It’s safe to say that nobody liked the new format. Fans, drivers, and team principals alike united in criticizing it. Even F1 mogul Bernie Ecclestone called it “pretty crap,” despite being the one who had wanted to switch up qualifying in the first place. Thus, good news: the backlash was so strong that the guys in charge immediately agreed to revert to the 2015 qualifying format for the next race!

Did you miss him? “Crashtor” Maldonado isn’t around anymore

Format problems aside, qualifying was also scary for viewers who had kept up with the last two seasons. Throughout the pre-season, it seemed that Ferrari had finally closed the gap to Mercedes, but both Hamilton and Rosberg were able to turn it up in qualifying and once again nab the top two spots on the grid with some margin. To many, it seemed like a bad omen that Mercedes would dominate once again—and while that’s certainly great for Mercedes’ sponsors, it’s boring for the rest of us.

Fortunately, we were wrong. It was immediately clear from the start of the race that Mercedes would not dominate. From 3rd place on the grid, Vettel punched right past Rosberg and Hamilton. In the commotion that ensued, Räikkönen slipped behind his teammate into 2nd place, leaving Rosberg to trail him while Hamilton fell further back to 6th, behind Massa and Verstappen.

By the time they pit a few laps later, Vettel had built himself a slight advantage, which he aimed to increase by switching to the supersoft tire compound. Meanwhile, though Hamilton had successfully overtaken Massa, he could find no way to get past Verstappen, even admitting on the radio that it wasn’t going to happen.

But whatever strategy the teams had in mind flew right out of the window on lap 19, when the whole race was turned upside down by a freak accident between Alonso and Gutierrez—watch it in the GIF further down, because words and still images cannot describe the intensity of the crash. Words also cannot describe how incredible it was that Alonso simply pulled himself out of his car’s remains and walked away totally unscathed.

There was so much debris left on the track that the race had to be red-flagged. A red flag is when all the cars go into the pits and line up in the same order that they were in on the track. While the marshals clear up the debris, the drivers are allowed to get out of the cars and the engineers may change the tires or make any other setup changes to the car that they wish. Once the debris is out of the way, the race restarts behind the safety car. 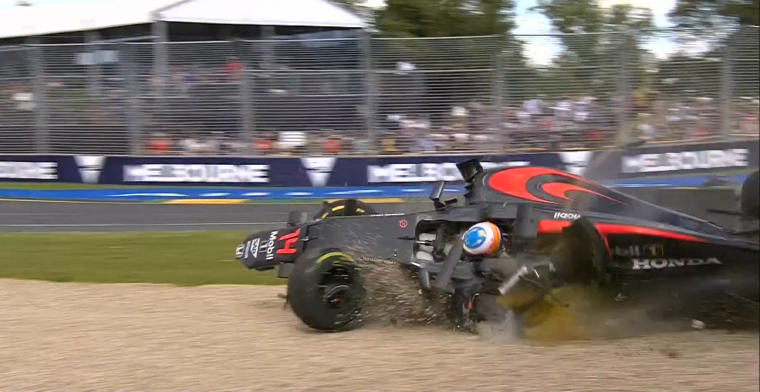 While Mercedes decided to fit its cars with the medium tires, Ferrari opted for the supersofts, which ultimately proved to be a costly error. With the medium tires equipped, Mercedes could go the remaining length of the race without having to pit again, while Ferrari didn’t quite have the speed—even on the faster tire—to build a gap large enough to offset the time lost by the next pit stop that they would inevitably have to make.

For Räikkönen, it ultimately made no difference, as he returned to the pits soon after the race restarted with flames spitting out of his car’s engine airbox. For Vettel, however, it turned a potential win into a fight for 2nd place. He was 3rd behind Hamilton after his final pit stop and caught up to the Brit with a few laps to go, but couldn’t find a straight long enough to make a pass stick. Eventually, he braked too late while trying to put himself into an overtaking position, which had him momentarily traveling through the grass and ended any hopes of a 2nd place finish right then and there.

Somehow, after all that, it was another Mercedes 1-2 with Vettel rounding out the podium, the same result we saw so often last year. Still, the way they got there was far more exciting than most 2015 races and made the rest of the 2016 season seem promising.

Both Toro Rosso drivers, Verstappen and Sainz, provided the rest of the excitement in the race. Verstappen started 5th and made life hell for Hamilton up until the red flag. After the race restart, it was Sainz’s turn to make Hamilton struggle to catch up to the frontrunners. However, they suffered from high tire degradation and had to pit around the same time, allowing Hamilton to finally get free air and race up to 2nd.

More on Verstappen: Why bringing the 17-year-old into F1 was a great move

Once that happened, the battle resumed between the two teammates. Verstappen was frustrated that Sainz had been called to the pits before him, despite having been ahead, and wanted the team to ask his teammate to move over so he could take a shot at passing the cars in front. But Sainz didn’t move over. Ultimately, they managed to overtake several cars together, but Verstappen certainly had lots to say on the radio.

The new American team, Haas F1, enjoyed the best debut race of any 100%-new Formula 1 team in history. Grosjean, who had started 19th (arguably because of the terrible qualifying format), raced all the way up to 6th to score 8 points for his team, helped in part by the red flag.

Jolyon Palmer, a former GP3 champion and F1 rookie, had a good showing as well, beating his teammate Kevin Magnussen in qualifying and in the race.

McLaren had looked as though it might have a strong weekend, but Alonso’s crash and a poor performance from Button meant that they scored no better than 14th.

Though the 2016 Australian Grand Prix ended with a classic Mercedes-Mercedes-Vettel result, just as it did in 2015, I’m a lot more enthusiastic about the upcoming season than I was at this same time last year. I don’t think Ferrari has quite caught up to Mercedes, but they should be fast enough to keep them honest every race and add some spice to the Hamilton v. Rosberg duel that has been unfolding over the last two years.

There’s a huge amount of young talent down the grid as well. With just a few exceptions, every driver in a Formula 1 car at the moment brings world-class skill to the sport—along with no small amount of ambition. I look forward to the midfield battles almost as much as to the fight for the championship.

The next race will take place in two weeks in Bahrain. See you then! 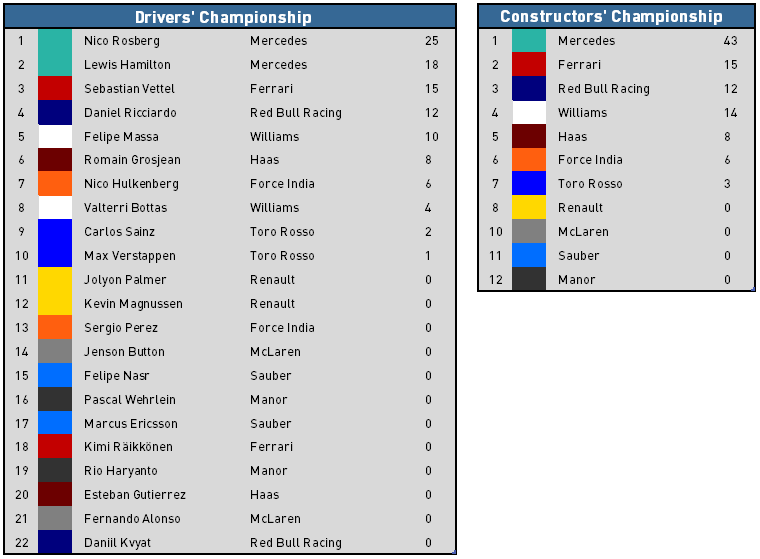