We have still only glimpsed teasers of the upcoming 2016 Camaro, which is set to debut this May. But while we may not know for sure what it will look like, GM did reveal today what it will weigh: “more than 200 pounds” less than the current fifth-gen model.

According to Camaro chief engineer Al Oppenheiser, the lighter Camaro is able to do “more with less.” 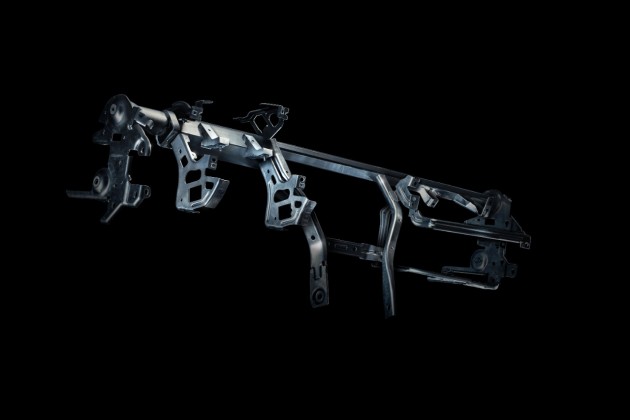 The 2016 Camaro features an aluminum beam which is 9.7 lbs lighter than the previous steel beam

“We kept the cornering confidence and control that make the Gen 5 Camaro 1LE so fun to drive, and added a greater sense of agility,” said Oppenheiser. “The new Camaro brakes harder, flicks into corners more quickly, and drives out of the corner faster. We expect it will set the benchmark in the segment and give many sports cars a challenge.”

The secret to the sixth-gen Camaro’s dieting success? A new, mass-efficient architecture, as well as several new lightweight aluminum pieces, including the beam that supports the instrument panel and the front and rear suspension assemblies.

The 2016 Chevy Camaro will premiere at Detroit’s Belle Isle Park on Saturday, May 16th.