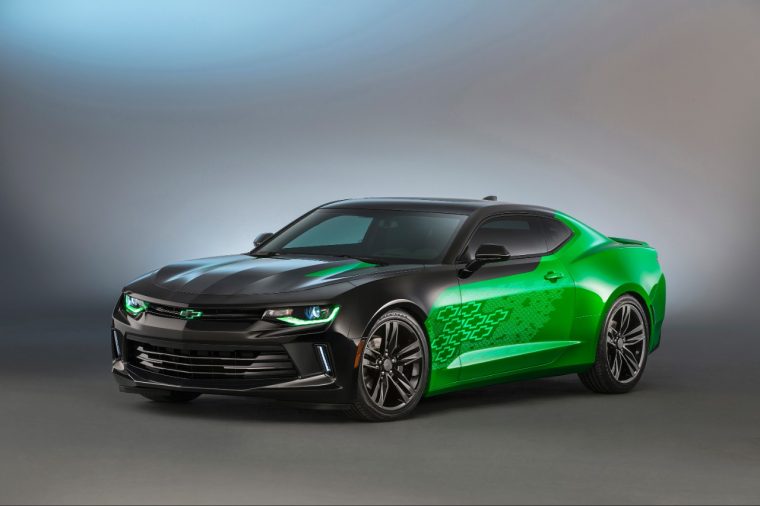 When General Motors filed a trademark application for the name “Camaro Krypton” back in May, many people wondered if a muscle car named after the Man of Steel’s home planet might have something to do with the upcoming Batman v Superman: Dawn of Justice movie. Like, maybe it would take on the gritty new Batmobile in a climactic drag race that would finally decide superhero supremacy once and for all…

Well, today the 2016 Chevy Camaro Krypton concept was revealed at the SEMA Show in Las Vegas, and it turns out the car’s name doesn’t refer to any exciting DC comic book characters, but rather to the vehicle’s paint job. Still, it’s a pretty cool paint job.

Named after the noble gas that is used to help illuminate fluorescent lights, the new concept car has a custom fluorescent green exterior color that is officially called “Krypton Green.” More excitingly, though, it’s also an electroluminescent paint job, meaning that with the flip of a switch, the body sides flash illuminated Chevy bowtie logos:

The Camaro Krypton concept also features 20-inch wheels, high-intensity discharge headlamps custom-trimmed in green, unique upper and lower grilles, darkened taillamps, and a rear spoiler. Additionally, the car boasts a sportier stance thanks to the Chevrolet Performance lowering kit, and is equipped with available dual-mode exhaust with custom-painted exhaust tips, as you can see in the photo gallery below:

Camaro Info: Sixth-gen Camaro to being built in Michigan

GM says that the Krypton Green exterior color was developed exclusively for this concept, so who knows if it will ever become available for Camaro customers.