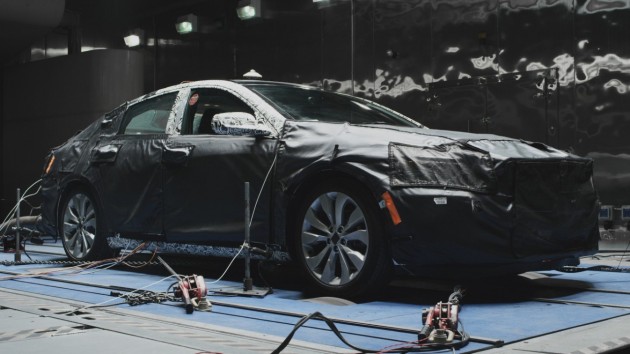 The 2016 Chevy Malibu isn’t set to debut until next month’s 2015 New York Auto Show, but the bowtie brand is giving us a sneak peak at the redesigned midsize sedan with a new teaser video that shows the difficult testing it underwent:

Chevrolet says information from over four decades worth of data collection boxes placed in cars around the world has helped them ensure that the new Malibu can handle “every jounce, bump and shudder inflicted” by rocky roads in the US, Russia, Saudi Arabia, and developing markets.

“Although most Malibu owners will never put their car through similar abuse, we test all new vehicles in extreme climates, inclement weather and on punishing road surfaces,” said Dan Devine, Malibu validation engineer. “The 2016 Malibu is definitely up to these challenges.”

Some of the “abuse” that the 2016 Malibu endured includes driving in Yuma, Arizona in July (when the average temperature is 107 degrees), and some January cruising in Northern Canada (where it averages a low of -13 degrees). Yet the most unforgiving climate was the GM Technical Center in Warren, Michigan, where the Climactic Wind Tunnel can be reaised to 140 degrees or lowered to 40 below zero.