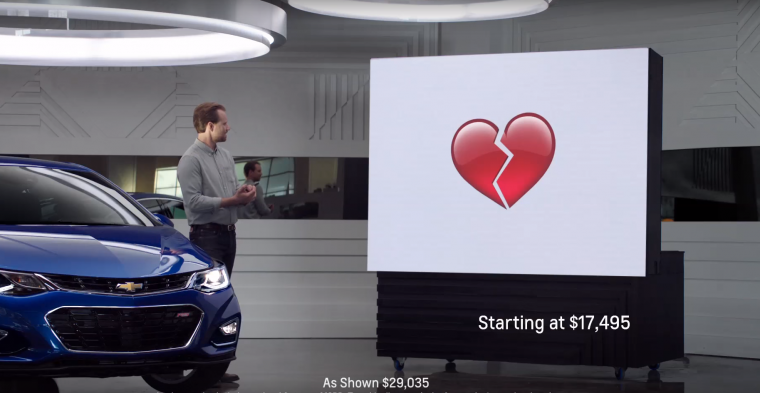 Chevrolet has been playing around with two distinct yet equally eye roll-inducing advertising campaigns for a while now.

The first is the bowtie brand’s “Real People, Not Actors” series of commercials, in which focus groups comprised of (supposedly but not always actually) non-actors are asked leading questions about a car industry they clearly don’t know much about.

The second is an emoji-based marketing campaign that panders shamelessly to Millennials with all-emoji press releases and a truly terrible emoji-themed music video.

Well recently, in the interest of promoting the 2016 Chevy Cruze, the automaker decided to combine the two marketing techniques into one god-awful commercial that features a focus group of “real people” describing their reaction to the new Cruze… using only emojis.

Just take a look, and see if you can avoid ripping your own eyes out like Sam Neill in Event Horizon:

Fortunately for Chevy, none of these “Real People” likened the Cruze to a smiling poop emoji. One focus group member did make a Freudian slip when she compared the compact car to a trash can, but she quickly corrected herself by explaining that she thought it was a basketball net.

One young woman with a bad case of vocal fry uses a blushing, winking emoji to describe the Cruze’s design, because she thinks that it is “sexy.” Another young woman mmm-hmmms in agreement.

Really, ladies? I feel like the Cruze’s design is more…

Then when the sandy-haired man tells the focus group that the Cruze carries a starting price of $17,495, focus group member Nick responds with a broken heart emoji. Why? “Because I spent way more on my car,” Nick says sheepishly.

Ok, but did you spend $11,500 more on your car, Nick? Because although the Cruze “starts” at 17 grand, the top-of-the-line model being shown in this commercial is actually $29,035. Had Nick realized that, his emoji might have been more like…

And you know what; something about all of these overwhelmingly positive responses to the Chevy Cruze seems a bit “off” to me.

That would explain why the Spanish-language version of this ad features a musical artist named Dario Black, who took to YouTube to express his gratitude to Chevrolet for the free media exposure that this commercial afforded him:

Dario Black may not have his Screen Actors Guild card, but he’s still someone whose interest in being famous almost certainly outweighs his interest in providing objective car reviews.

I guess what I’m saying is that these “Real People, Not Actors” commercials make me want to…

[That’s the “ripping my own eyes out like Sam Neill in Event Horizon” emoji.]

Or, to put my thoughts into words rather than emojis (a novel concept, I know), here are what I see as the primary weaknesses of the “Real People, Not Actors” marketing campaign: