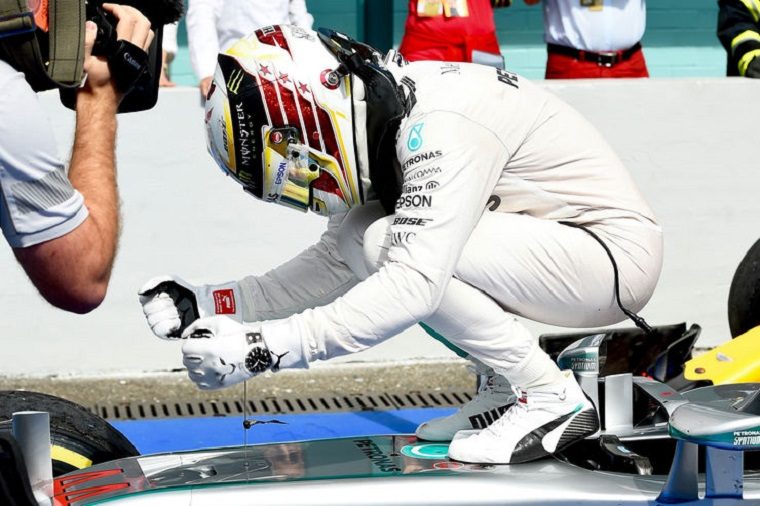 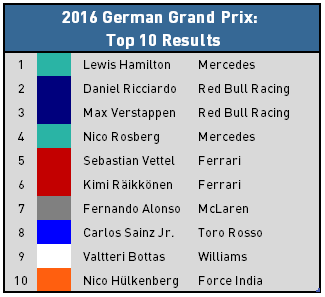 Last week, for the third time this season, I moaned about the radio ban that prevented drivers from communicating with their race engineers when they cars had a problem—such as when Jenson Button lost hydraulic pressure that made his brake pedal get stuck and he received a penalty when his engineer told him how to fix it.

It seems the FIA has finally listened to the fans, however, as the radio ban has been lifted. Like in the old days (and by that I mean any time before the end of 2014), drivers and engineers can now finally say whatever they like to each other—and it made the race more interesting.

It was also nice to see the German Grand Prix back on the calendar after Bernie Ecclestone essentially bullied it out of the calendar last year with his exorbitant fees.

There were two main storylines to follow this weekend: would it be Lewis Hamilton or Nico Rosberg leading the championship heading into the mid-season summer break? And would Ferrari manage to keep Red Bull at bay, for now?

It didn’t take long to see which way the answers were going. 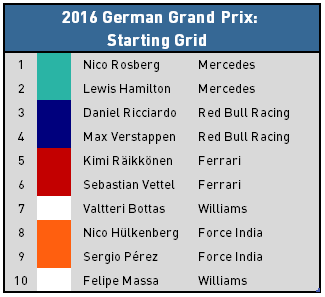 Qualifying always has the potential to be a mixed bag, but this time the ten theoretically fastest cars actually made the top ten starting grid for the first time this season.

In addition, when the final qualifying session (Q3) came around, it was clear that Red Bull had the edge on Ferrari and unclear what was happening to Sebastian Vettel. After a strong 2015 season and a decent start to 2016, Vettel seems to be in a bit of a slump right now. He was once more outqualified by his teammate Kimi Räikkönen and couldn’t manage any better than sixth.

Meanwhile, Daniel Ricciardo’s Red Bull got quite close to the two Mercedes, though he must simply have been happy to beat Max Verstappen in qualifying for the seventh time this season. They haven’t shown it too much because they aren’t fighting for the championship but there’s a lot of pressure between the two teammates to outdo each other.

The highlight of qualifying was Rosberg, who had to abort his initial Q3 lap after an electronics glitch sent him back to the pits for a quick fix. That meant he only had one attempt at pole with extra fuel onboard, but he put in a stonking lap to start at the front of the grid and more importantly, ahead of Hamilton.

Unfortunately, that was about as good as the weekend got for him. 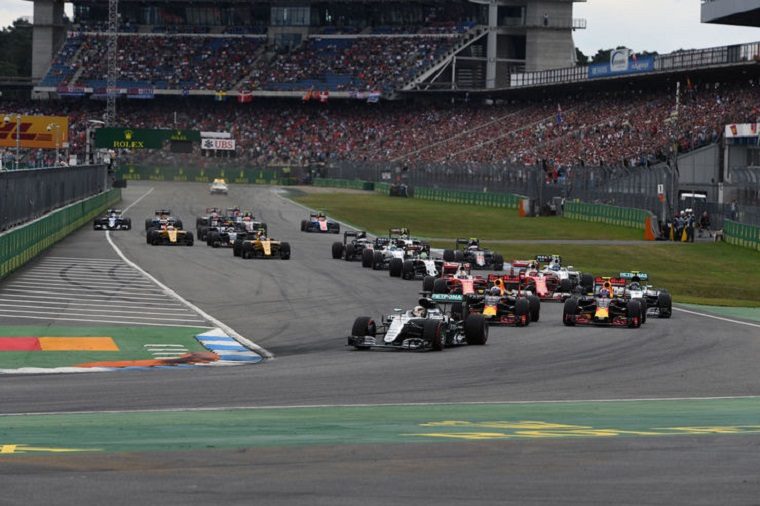 I was expecting to see Mercedes run away with it while Red Bull and Ferrari fought for scraps, but what we got instead was a Mercedes fight with Red Bull while Ferrari trailed behind. Rosberg had a poor start that saw him drop to fourth behind both Red Bull drivers and that’s when it was clear which direction the two main storylines I mentioned earlier were headed.

The only person who can challenge Hamilton for wins is Rosberg, and if Rosberg is stuck behind two fast Red Bulls, the British driver only has to cruise to the win. In fact, the race quickly went from bad to worse for Rosberg, who struggled to overtake Ricciardo and Verstappen until Mercedes pit him early to set up an undercut, which almost worked. It got him past Ricciardo and put him just behind Verstappen—close enough that he attempted to pass on the next straight. 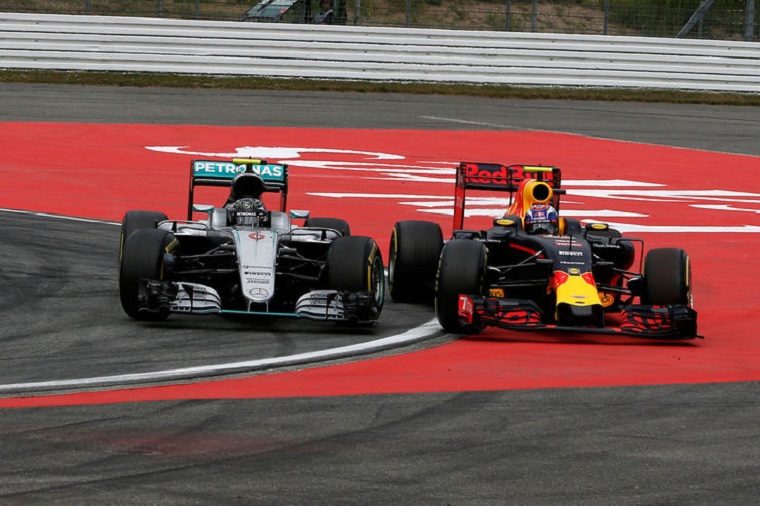 Like he did against Räikkönen last week, Verstappen dangerously moved under braking to block Rosberg’s overtake, which made the latter take evasive action and go deeper in the corner than he would have otherwise. It made it look like he intentionally went deeper than necessary to force Verstappen to the edge of the track, as he did in Austria vs. Hamilton.

Rosberg got past and I thought it had been a brilliant piece of racing; until, that is, the stewards handed Rosberg a five-second penalty. As a racing fan, it was hard to swallow—isn’t the whole point to see these guys fight tooth-and-nail? Everyone on the pro-Hamilton Sky Sports paddock and several former and current drivers agreed the penalty was undeserved. 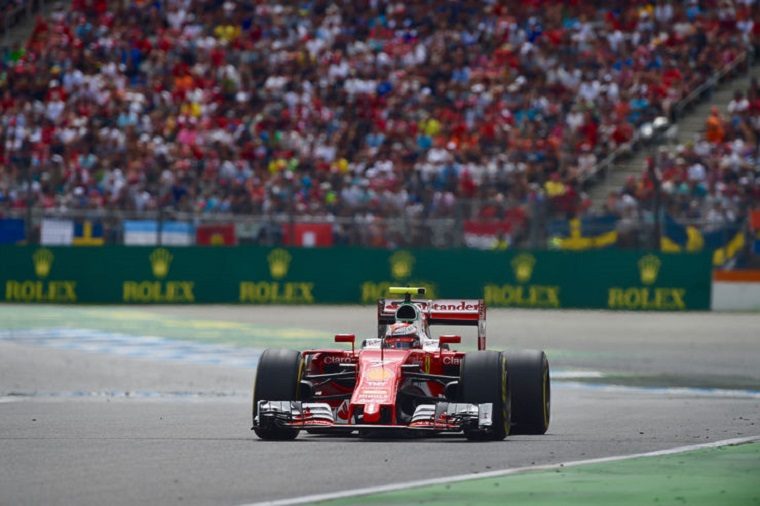 Nonetheless, it was done and the penalty ruined Rosberg’s race, who served it at his next pit stop (which was unusually long even accounting for the penalty) and found himself behind both Red Bulls once more. After that, he couldn’t improve and he scored a measly 12 points to Hamilton’s 25, giving the former a 19-point lead in the championship before the break.

It also meant that both Red Bull drivers finished on the podium while Ferrari’s Vettel and Räikkönen trailed in fifth and sixth, respectively, knocking the Scuderia down to third in the constructor’s championship for the first time this year. Someone is getting chewed out in Maranello as we speak, you can bet on it. 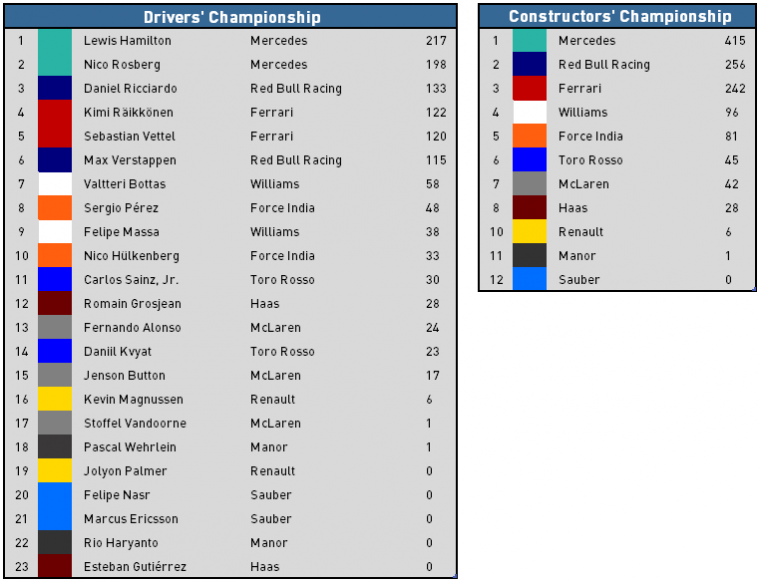